The regiment was created on March 20, 1672 from 13 companies of a Catalan regiment named "Mazarin" who later became Royal Roussillon Infanterie. At the end of the year, the regiment was increased to 20 companies.

In 1688, at the outbreak of the Nine Years' War (1688–97), the regiment was initially part of the Reserve in Germany. In 1689, it participated in the relief of Mainz. In 1690, it campaigned on the Rhine. In 1691, it was transferred to Italy where it took part in an expedition in the Aoste Valley, in the capture of Nice, Villefranche, Montalban, Veillane and Carmagnola, and in the siege of the Castle of Montmélian. For the campaign of 1692, the regiment was recalled in Flanders where it took part in the capture of Namur, in the Battle of Steenkerque and in the bombardment of Charleroi. In June 1693, the regiment marched to the Rhine. In 1694, it returned to the Low Countries. In 1695, it was at the bombardment of Bruxelles. In 1696, it was posted on the Scheldt. In 1697, it served on the Meuse.

In 1701, at the outbreak of the War of the Spanish Succession (1701-13), the regiment was sent to the country of Juliers. In 1702, it took part in the unsuccessful defence of Kayserwerth; in 1704, in the disastrous Battle of Blenheim where it was almost entirely taken prisoners. It remained in captivity at Ulm until 1707. It then remained in the Lines of the Lauter till the end of the campaign of 1710. In 1711, the regiment initially campaigned on the frontier of Flanders but was soon transferred to the Army of the Rhine. It then remained in Alsace till the end of the war. In 1713, it took part in the capture of Landau and Freiburg.

In 1715, the regiment was reduced to a single battalion.

In 1719, during the War of the Quadruple Alliance (1717-20), the regiment campaigned in the Pyrenees, taking part in the capture of Fuenterrabía and San Sebastián and in the blockade of Roses.

In 1732, the regiment took part in the training camp of the Moselle.

In March 1742, during the War of the Austrian Succession (1740-48), the regiment was initially part of the 3rd Division of the Army of Bavaria which marched to Donauwörth. In May, one battalion was sent to Bohemia and later took part in the combat of Sahai and in the resupplying of Frauenberg before retiring to Prague where it was joined by the other battalion. The entire regiment then played an important role in the defence of Prague. In October, a battalion was sent to Leitmeritz where it was surrounded by the Austrians and taken prisoners. Meanwhile the other battalion evacuated Prague and retired towards the Rhine. In January 1743, the battalion arriving from Prague was redirected to Lille to replenish its ranks (then counting only 25 officers and 180 soldiers). In May of the same year, the battalion imprisoned at Brünn was freed. In July, the remnants of each battalion were converged in a single battalion. In 1744, the regiment was selected to take in the expedition in Scotland. Which was canceled. It then took part in the sieges of Menin, Ypres and Furnes. In 1745, it initially campaigned on the Rhine but was transferred to Flanders at the end of June, taking part in the sieges of Termonde and Ath. In 1746, it went to Bruxelles and occupied Anderlecht. It then fought in the Battle of Rocoux. On November 13, 1746, the regiment was re-established at two battalions and sent to Provence. In 1747, it contributed to the conquest of the County of Nice. It was then recalled to Flanders. On November 15, 1748, the regiment was reduced to a single battalion.

On March 10, 1749, the regiment incorporated troops from the disbanded Aunis Infanterie and thus re-established at two battalions..

During the Seven Years' War, the regiment ranked 53rd and was commanded by:

On December 10, 1762, the regiment was affected to the service of ports and colonies. It then went to Toulon.

The first battalion remained in Europe throughout the war. By August 1, 1757, the regiment was stationed on the Isle of Ré in Aunis Country.

On May 3, 1755, the second battalion (13 companies) embarked for Canada. The Lys (64), transporting four of these companies, was captured before reaching her destination. On September 8, two companies of Languedoc Infanterie, under Dieskau, took part in the Combat of Lake George. Along with 2 companies from La Reine Infanterie, these 2 companies of Languedoc Infanterie were the first French regulars to participate in a battle in North America during the Seven Years' War. After this battle, British provincial troops maintained their position but stopped their progression on Fort Saint-Frédéric (present-day Crown Point, NY). The nine companies of the battalion took up their winter-quarters at Fort Chambly and along the Richelieu River.

In May 1756, the 2nd Battalion was posted at Ticonderoga where it took part in the construction of Fort Carillon. On November 12, it left Carillon to take its winter-quarters in Laprairie.

By July 20 1757, a French force totaling 8,000 men (including the 2nd Battalion) was gathered at Carillon. On August 1, this force left Carillon with Montcalm and advanced upon Fort William Henry. The battalion then took part in the siege of Fort William Henry which lasted from August 5 to 9. After the capture and destruction of the fort, the French force reembarked on August 16 and returned to Carillon. On September 4, the battalion left Carillon and arrived at Saint-Jean on September 7 where it worked at the fortification of the place. On October 12, a piquet of the battalion was sent to Carillon to garrison the place during winter. On October 26, the battalion left Saint-Jean for its winter-quarters in Pointe-aux-Trembles. The thirteen companies of the battalion took up their winter-quarters on the north and south banks of the Saint-Laurent River upstream from Québec.

In mid June 1758, the battalion left its quarters and moved towards Carillon. On June 30, the battalion was part of the detachment that Montcalm sent to the left bank of the channel connecting Lake Saint-Sacrement (present-day Lake George) to Lake Champlain. On July 6, it retreated to Carillon. On July 7, it worked at the entrenchment in front of the fort. On July 8, the battalion took part in the victorious Battle of Carillon where it was deployed at the extremity of the left wing under Bourlamaque. In this battle, the battalion lost Captain de Fréville, Lieutenant de Parfouru and 9 soldiers killed; Captains de Basserode, de Marillac and Duglas, three lieutenants and 45 men wounded. Between November 1 and 5, the entire French army quit Carillon to move to its winter-quarters, leaving detachments from various battalions to guard the fort. The thirteen companies of the battalion took up their winter-quarters on the north and south banks of the Saint-Laurent River near Trois-Rivières.

On May 29 and 30 1759, the Chevalier de Lévis arrived at Québec with all 5 battalions of regulars (II./La Sarre, II./Royal Roussillon, II./Languedoc, II./Guyenne and II./Béarn) along with Milice du district de Montréal. While awaiting the arrival of the British fleet, the French army encamped on the right bank of the Saint-Charles River and fortified it to serve as a second line of defence if ever the British were able to land at Beauport. On June 26, the French army moved to its encampment at Beauport. The 5 battalions of regulars, forming a single brigade, held the centre. On September 13, the battalion took part in the Battle of Québec (aka Battle of the Plains of Abraham) where it was deployed in the centre. After the battle, the regiment followed the French army in its retreat towards Jacques-Cartier. In November, the battalion took its winter-quarters on the north and south banks of the Saint-Laurent River in the Government of Trois-Rivières.

By March 1760, 51 men of the battalion had been detached to Saint-Jean while 23 were unfit for duties. This left 361 men available for the expedition against Québec. The latter were supplemented by 462 men from the Milice du district de Trois-Rivières who were integrated into the battalion. In March, French spies reported that the British planned to capture the posts at Pointe-aux-Trembles (present-day Neuville) and Jacques-Cartier. Reinforcements were sent from the Government of Trois-Rivières along with 225 men from Languedoc Infanterie. However, the information obtained from the spies about the British plan proved to be wrong. The troops sent to the Government of Trois-Rivières returned home while the detachment of Languedoc Infanterie cantoned at Pointe-aux-Trembles. From April 21 to 25, transport vessels gradually sailed from Montréal for Québec. Overall the battalions then counted 14 officers, 280 regulars, 285 militia and 11 non-combatants for a total of 594 men. On 28 April, the battalion took part in the victorious Battle of Sainte-Foy but the arrival of a British fleet forced the French army to retire progressively towards Montréal. On September 9, after the capitulation of Montréal, the battalion still counted 243 men and 23 officers. On September 14, as per the terms of the capitulation, the battalion was embarked aboard British transports who reached Québec on October 10 and 11 and then sailed for France where they arrived in December.

After the return of the 2nd battalion to France in 1760, the regiment was reorganised by the regulation of February 1, 1761 into only 12 companies of 20 fusiliers and one company of 40 grenadiers. It was stationed at Pont-Saint-Esprit. 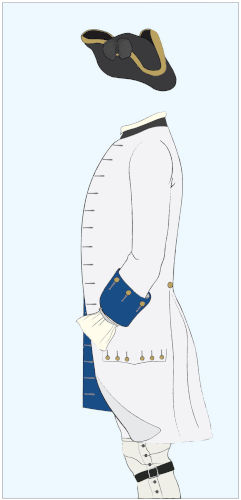