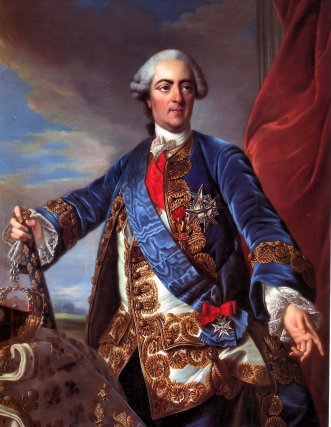 Louis XV was the great-grandson of Louis XIV and the third son of Louis, Duc de Bourgogne, and Marie Adelaide, Princess of Savoy. His elder brother died in 1705. In 1712, his father, mother and second elder brother were carried off by a mysterious disease. These series of unfortunate events made him Louis XIV's successor to the throne.

In 1715, at Louis XIV's death, Louis was crowned as Louis XV. He was only 5 years old. Philippe II, Duc d'Orléans, was declared regent, governing until Louis' legal majority in 1723. Fleury, bishop of Fréjus, was appointed as Louis' tutor. His first minister was the Duc de Bourbon.

In 1725, after the repudiation of his betrothal with a Spanish princess, Louis XV married Maria Leszczynska, daughter of the exiled King Stanislaw I of Poland, then residing in Alsace.

In 1733, France interfered in the disputed succession in Poland on behalf of Stanislaw I, the queen's father. This gave rise to the War of the Polish Succession against Austria.

In 1735, at the Peace of Vienna, France secured the possession of Lorraine even if it had been quite unsuccessful in the field. Up to this point, Louis XV's reign had been prosperous but from this time on it is a record of declining national strength.

In 1740, at the death of Holy Roman Emperor Charles VI, France contested Maria Theresa's right of succession. Meanwhile, Frederick II of Prussia seized the opportunity to invade Silesia which his dynasty had claimed since several years. France sided with Prussia against Austria and Great Britain in what became known as the War of the Austrian Succession.

In 1743, on Fleury's death, Louis XV decided to adopt the example of Louis XIV and to establish a personal autocracy. However, he never really got involved in the day to day administration of his kingdom, lacking any tenacity of purpose. French foreign policy in this period was made chaotic by Louis's "secret diplomacy", as his agents in other countries sometimes pursued aims that were in conflict with those of his own ministers. Furthermore, Louis XV was easily influenced by his mistresses. The first to acquire notoriety was the Duchesse de Chateauroux.

In 1744, the Duchesse de Chateauroux was at least in part the cause of the only moment of popularity which the king enjoyed. Indeed, she urged him to take part personally in the war. France had just received a humiliating check at Dettingen (June 27, 1743), and the invasion of the north-eastern frontier was feared. The king went to Metz and his presence there did something to parry this threat. While in Northern France, Louis XV fell dangerously ill. Fearing death and hell, Louis XV dismissed the Duchesse de Chateauroux and promised amendment. Prayers were offered everywhere for his recovery, and the country was swept by a delirium of loyal enthusiasm, which conferred on him the title of Louis le Bien Aimé. He finally recovered while the Duchesse de Chateauroux died before the end of the year.

In 1745, Madame de Pompadour became Louis XV's mistress. This woman had philanthropic impulses and some real interest in art and letters. However, her influence on public affairs was a fatal one.

In 1748, the Peace of Aix-la-Chapelle, which ended the War of the Austrian Succession, brought no gains to France in spite of her victories at Fontenoy and Raucoux which allowed her to occupy most of the Austrian Netherlands. Louis XV was blamed for this diplomatic failure.

Between 1748 and 1756, intense diplomatic activities resulted in the great reversal of alliances whereby France repudiated the alliance of Frederick II of Prussia and joined hands with her old enemy Austria. The intrigues of Madame de Pompadour played an important if not decisive role in this diplomatic turmoil.

The Seven Years' War (1756-63) that France fought alongside Austria was the cause of immense disasters to France. After a promising beginning, both by land and sea, France suffered terrible reverses. From 1760, the Duc de Choiseul somewhat improved the general governance of the country but it was too little too late. By the end of the war, France had lost most of his colonies including India and Canada to Great Britain and her predominance in Europe was challenged by the emergence of Prussia as a major power.

In 1764, on the death of Madame de Pompadour, Madame du Barry succeeded her as Louis XV's mistress.

During the last years of Louis XV's reign, a strong reaction against the monarchy and its methods materialized in France. One of his only success was the annexion of Corsica in 1768. However, this was mostly the work of the Minister Chauvelin. Cooperating with his chancellor, René de Maupeou, Louis XV tardily attempted to reform the taxation system. He finally succeeded in implementing taxes upon the previously exempt nobility and clergy.

In 1774, Louis XV died of smallpox. Soon after his death, the tax reform that he had promulgated in 1771 was abrogated.