The regiment was raised on February 19, 1674 by the Marquis de Navailles.

In 1676, the regiment campaigned against the Spanish migueletes. In 1677, it took part in the Battle of Espouilles; in 1678, in the siege of Puygcerda and in the capture of the Castle of Baga.

In 1684, the regiment was at the siege of Luxembourg.

On the eve of the War of the Spanish Succession (1701-13), the regiment counted only one battalion but, on 1 February 1701, it was increased to two battalions. The second battalion was raised in Cambrai. Until 1709, the two battalions operated independently in different theatres of operation:

From 1714, the regiment was stationed in Languedoc.

In 1733, at the beginning of the During the War of the Polish Succession (1733-35), the regiment was sent to Italy where it took part in the sieges of Gera d’Adda and Pizzighetone. In 1734, it was at the capture of Cremona, Serravalle, Novara and Tortona, fought with distinction in the Battle of San Pietro and took part in the siege of Mirandola. In 1735, it was at the capture of Reggiolo and Revere. It returned to France in August 1736 and was placed in garrison in Barcelonette.

In 1737, the regiment was transferred to Montpellier, Lunel, Nîmes and Cette. In 1739, it was at Montlouis.

In 1741, at the beginning of the War of the Austrian Succession (1740-48), the regiment initially served in the various places in the Cévennes. In 1742, it joined the Army of Bavaria and marched to the relief of Prague but was stopped at Plan. In 1743, after a rude winter, the regiment could field only 100 men. It received reinforcements and then took part in the defence of Eger where it surrendered as prisoners of war. In 1744, a second battalion was raised in Caen while the first was still in captivity. In 1745, the first battalion was exchanged and joined the second at Caen. In 1746, the regiment was sent to the Austrian Netherlands and took part in the siege of Namur and in the Battle of Rocoux, before being sent to the relief of Provence. In 1747, the regiment operated in the County of Nice. In 1748, it returned to Toulon. At the end of the year, its second battalion was disbanded.

On March 10, 1749, the regiment incorporated the disbanded Dauphiné Infanterie which formed its second battalion. The regiment was then posted at Strasbourg. In 1750, it was transferred to Neufbrisach and Huningue; in 1751, to Briançon; in 1752, to Toulon; in 1753, to the camp of Beaucaire and then Perpignan; and in 1754, to Tournon. From October 1755, it occupied various places in Languedoc.

During the Seven Years' War, the regiment ranked 56th and was under the command of:

In 1756, the regiment mustered at Toulon for the preparation of the expedition against Minorca. In the night of June 27 to 28, during the Siege of Fort St. Philip, the regiment took part in the storming of the Queen Redoubt, the Kent Lunette and the outworks of Stragen and Argyle. In this assault, it lost Lieutenant Gérard and 18 grenadiers killed; and Captain de Vallin, his brother the Chevalier de Vallin, Captains de Montviel, de Bellecombe, Bérail, d'Oms and Lieutenant de Marvîlle wounded. The regiment garrisoned Minorca Island for the rest of the Seven Years' War. 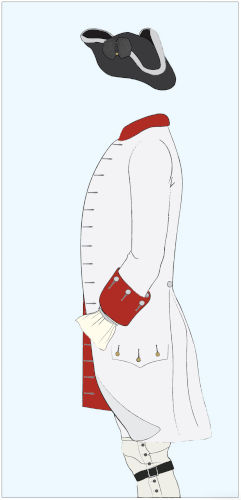 Menguy, Patrice: Les Sujets du Bien Aimé, an interesting websites which seems unfortunately to have disappeared from the web)