The Makedónskiy Hussar Regiment was raised on May 10, 1759 by General Horvat to reinforce the Russian light cavalry. It initially consisted of 10 companies, each of 100 troopers for an effective fighting strength of 1,044 men. Its kernel consisted of troopers from Horvat Hussars. More precisely, the regiment consisted of:

In 1760, the regiment was quartered in Little Russia (aka Malorussia).

In 1761, the regiment was attached to the Reserve of Lieutenant-General Vasilij Ivanovic Suvorov with Shirvanskiy Infantry and 14 third battalions. The Reserve did not serve on the front. There are evidences that part of the regiment, or maybe the entire regiment, took part on September 14 in a combat for the defence of the magazines in Kobylin and probably the following day at Gostyń. By the end of October, the regiment operated under Dvilke with the Nizegorodskiy Dragoons, Malorussian Cossacks and Mashlikin Cossacks; covering the line of communication with Posen (present-day Poznań). 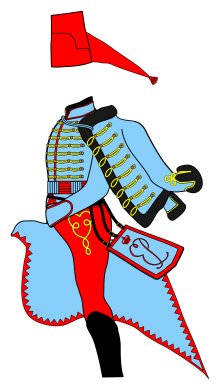 Trumpets and kettle drums were made of copper and probably decorated with red lace and cords.