In 1734, the artillery, under the command of the Marquis General Rangoni and the Commissar Domenico Corradi (Deputy of Materials) and Francesco Mainardi (Deputy of Ammunition) with the advice of the French Commissar Louis Labinon, had a total of 56 guns and 3 bronze mortars.

The personnel consisted of a staff of 77 men, 10 bombardiers and 437 volunteers (23 corporals included) in four companies (named after their garrison as Modena, Reggio, Carpi and Montalfonso) with detachments in Correggio, Mirandola, Rubbiera, Bregantino di Brescello, Sestola and Veruccole.

An arsenal and a foundry were located in Modena (Piazza Sant’Agostino).

During the War of the Austrian Succession, after the invasion of the Duchy of Modena by an Austro-Piemontese army, the unit was disbanded.

In 1764, the military expenses were reduced and at the end of the year the artillery companies were disbanded. 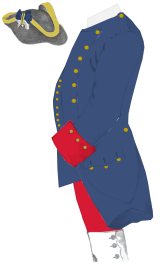 Dr. Marco Pagan for gathering most of the information about this regiment