The ship was built by I. V. James (И. В. Ямес) at the Solombalskaya dockyard in Arkhangelsk. It was the first 54-gunner built 2 feet wider than her sister ships to make the passing of shallow banks nearby Arkhangelsk easier. The keel was laid down on May 10, 1757 (April 29 old style, abbreviated O.S. in this article). She was launched on May 31, 1758 (May 20 O.S.). She was attached to the Fleet of the Baltic Sea.

The ship was broken up in 1771 in Kronshtadt. 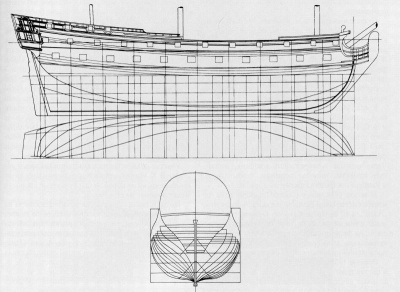