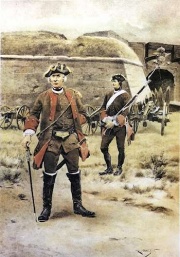 We know that, before the Seven Years War, the uniform for the Austrian artillery was wolf grey ("Wolfsgrau"). It seems that the change of color took more time in the Niederländ Feldartillerie Korps than in the Deutsche Feldartillerie Korps. So, this color was perhaps still in use in this corps at the beginning of the war : we have shown this color for 1756.