The 2nd Musketeer regiment was created in 1756 and should consist of 4 battalions. The theoretical organisation of this regiment was as follows:

In the Autumn of 1757, the regiment (only 3 bns), initially stationed in Moscow, was sent to Smolensk. Furthermore, at the end of the year, its troops were used to fill the ranks of the other regiments of the Observation Corps.

In 1759, the regiment was not yet up to strength. Its troops were once more used to complement the other regiments of the corps who had suffered heavily during the engagements of this campaign.

At the beginning of 1760, the entire Observation Corps was disbanded and its troops were integrated into the Fusilier Regiments of the Artillery. 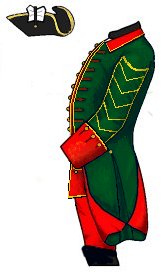 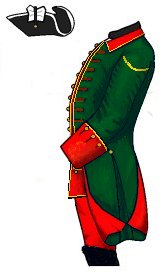 N.B.: the regiments of the Observation Corps were distinguished by the colour of the field and flames of their flags. These distinctives are known (blue with raspberry red flames; cherry red with white flames; green with raspberry red flames; light blue with yellow flames; yellow with gold flames). However, we not been able to find a source associating them with the respective regiments. Here we arbitrarily chose to illustrate the regimental flag with a red field and white flames.