The regiment was raised for the regent on April 1 1718. After his death, the regiment remained under the nominal command of 3 successive dukes of Orléans.

During the War of the Polish Succession, the regiment served on the Rhine from 1733 to 1736.

In 1756, the regiment counted 4 squadrons and ranked 7th.

During the Seven Years' War, the regiment was under the nominal command of Louis-Philippe, Duc d'Orléans.

During the Seven Years' War, the regiment was under the effective command of its mestre de camp lieutenant:

In 1757, the regiment joined the Army of the Lower Rhine, commanded by the Maréchal d'Estrées, for the planned invasion of Hanover. At the end of June, it was at the camp of Bielefeld with d'Estrées' main corps. On July 23, the regiment was part of the corps of the Marquis de Contades, consisting of 30 grenadier companies and three dragoon regiments, who advanced on the village of Brukensense at nightfall. On July 26, the regiment was at the Battle of Hastenbeck where it fought dismounted as part of the right wing under d'Armentières. After the victory, the regiment encamped at Grosselsen near Hameln with the main body of the Army of the Lower Rhine from July 31 to August 2. On August 8, the Maréchal Duc de Richelieu, now commanding the army, sent the regiment along with the Grenadiers de France and two other dragoon regiments ahead to occupy the city of Hanover. On August 26, Richelieu detached the Duc de Chevreuse on the right bank of the Lev with the Orléans Dragons, 2 other dragoon regiments, 12 cavalry squadrons and an infantry brigade to advance on Bottmer and to throw bridges on the Lev at Etzel. At the end of the year, the regiment took its winter-quarters in Xanten on the Lower Rhine, in the fourth line of the French army.

In February 1758, when Ferdinand of Brunswick launched his winter offensive in Western Germany, the regiment retired on the Rhine with the rest of the French army. From March 30 to April 4, it was on the left wing of the army of the Comte de Clermont in the camp of Wesel on the Lower Rhine. In April, when Clermont redeployed his army along the Rhine, the regiment was placed in the third line at Straelen near Venlo. After the successful crossing of the Rhine by an Allied army under Ferdinand of Brunswick on May 31, the regiment retired towards Rheinberg where it joined Clermont's Army on June 2. It remained in this camp until June 12 and was placed on the flank behind the left wing. On June 23, the regiment took part in the Battle of Krefeld where it formed part of the reserve, under the Duc de Chevreuse. In Mid August, after Ferdinand's retreat to the east bank of the Rhine, the regiment, as part of the Army of the Lower Rhine now under Contades, recrossed the Rhine to follow the Allies. On August 20, it was encamped near Wesel where it formed part of the Reserve.

By February 9, 1761, the regiment was attached to Broglie’s Army, and was part of a force of 10 bns and 9 sqns deployed in a cordon between Frankfurt and Hanau. On March 21, the regiment took part in the Engagement of Grünberg, where it was attached to Closen’s Corps, which attacked the Allies as they were forming on the heights behind Atzenhain. On March 25, the regiment formed part of a detachment of the vanguard under Montchenu, who drove the Allies out of the village of Mengsberg before catching up with Zastrow’s rearguard at Leimsfeld, capturing 1 flag, 2 guns, majors-generals Zastrow and Schlüter, a dozen of officers and more than 300 prisoners. By mid-April, the regiment was posted in the area of Trebur, Wiesbaden, Bingen and Ellfeld. On October 9, it was part of a force under Caraman, which advanced towards Hameln. Near Halle, it came to contact with Stockhausen's Corps, attacking and defeating this corps and capturing Stockhausen. Caraman, joined by Chabot's Corps, was pursuing the defeated corps when Luckner's Corps and Prince Frederick of Brunswick came to its support, forcing Caraman and Chabot to retire, which they did in good order despite several lively charges by their pursuers.

In March 1762, the regiment formed part of the Army of the Upper Rhine, under Soubise. On June 24, the regiment was present at the Battle of Wilhelmsthal. By July 12, it was posted at Landwerhagen under Prince Xavier. On November 20, when Louis XV issued his instructions regarding the French armies serving in Germany, specifying which units should return to France right away and which should stay in Germany till the final evacuation, the regiment was among those which remained in Germany. 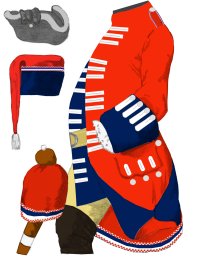 In December 1762, a regulation introduced a brand new green uniform with red as the distinctive colour.

Saddlecloth lace - Source: PMPdeL
As per Beneton, in 1739 the uniform was red lined blue and laced with a braid at the livery of Orléans (2 rows of red and white checkerboard with 2 central stripes: one white, one blue).