The regiment was created on September 7, 1684 and took the name of the province of Périgord. Indeed, expecting a Coalition to soon form against France, Louis XIV raised 30 new regiments from September 1 to 30 for the defence of the various places of the realm. By raising one regiment a day, he avoided any problem of precedence among these new regiments. The regiment initially garrisoned places in Northern France.

In 1690, during the Nine Years' War (1688-97), the regiment joined the Army of the Alps. The same year, it contributed to the capture of Cahours, fought in the Battle of Staffarda and participated in the submission of Saluzzo, Barges and Susa. In 1691, it took part in the sieges of Villefranche, Montalban, Nice, Veillane, Carmagnola and Montmélian. In 1692, the regiment was transferred to Flanders where it participated in the capture of Namur, in the Battle of Steenkerque and in the bombardment of Charleroi. In 1693, it served on the Rhine. At the end of 1694, it returned to Piedmont and was placed in garrison in Pinerolo where it remained until 1696. In 1696, it took part in the siege of Valenza before being transferred to Catalonia. In 1697, it opened the trenches in front of Barcelona.

Meanwhile, from 1701 to 1713, the second battalion assumed garrison duty in various places in Flanders and Alsace. In 1708, it took part in the unsuccessful defence of Lille. In 1713, the two battalions of the regiment were united for the first time. They took part in the sieges of Landau and Freiburg.

In 1719, the regiment was involved in the campaign against Spain, taking part in the sieges of San Sebastián, Fuenterrabía and Urgell.

In 1733, at the outbreak of the War of the Polish Succession (1733-35), the regiment formed part of the three French regiments selected to sail to the relief of Danzig (present-day Gdańsk) under the command of Brigadier de la Mothe La Peyrouse. On his arrival off Dantzig La Mothe realised that he would have to break through 30,000 Russians to reach the place. Accordingly, he brought back his small fleet to Copenhagen. In 1734, the Comte de Plélo replaced La Mothe as commander and sailed from Copenhagen towards Dantzig, landing at Fahrwasser. On May 27, the regiment took part in an unsuccessful attempt to relieve Dantzig. On June 22, the French corps capitulated with the honours of war but was transported to Livonia as prisoners of war. In October 1734, the survivors were finally sent back to France. On its return to France, the regiment was stationed in Cherbourg.

In 1742, during the War of the Austrian Succession (1740-48), the regiment was initially stationed at Dunkelfingen. In 1743, it was at Deckendorf in 1743. From 1744 to 1748, it served in Italy. In 1745, it took part in the sieges of Serravalle and Tortona, in the combat of Rivaronna and in the submission of Alessandria, Valenza, Asti and Casale; and in 1746, in the battles of Piacenza and Rottofreddo where it was virtually annihilated. In 1747, the re-established regiment fought in the combat of Assietta. In December 1748, the regiment returned to France.

In 1753, the regiment took part in the training camp of Beaucaire.

In March 1757, the regiment marched to Stockheim to join the Army of the Lower Rhine. On May 5, the regiment was assigned to the blockade of Gueldre which capitulated on August 22. The regiment was then placed in garrison in Gueldre. It later joined other troops at Emden. In November, it finally joined the main army. At the end of the year, the regiment took up its winter quarters in the first line in the area of Bassum and Hoxter.

In April 1758, when Clermont redeployed his army along the Rhine, the regiment was stationed at Griethausen near Kleve. After the successful crossing of the Rhine by Ferdinand's Army on May 31, the regiment retired towards Rheinberg where it joined Clermont's Army on June 2. It remained in this camp until June 12 and was placed in the centre of the first line. In June, it occupied Düsseldorf with Vastan Infanterie and Foix Infanterie. On August 5, the regiment formed part of Chevert's Corps and took part to the Combat of Mehr where it was brigaded with Brancas Infanterie. It charged three times, each time leaving a hundred men on the field. Its brigade being the last one to retire from the battlefield. In October, exhausted, the regiment returned to France.

From 1759, the regiment served on the coasts of France.

In 1762, the regiment was stationed in Brest. At the end of the year, it was affected to colonial service and sent to Marseille and Aix. 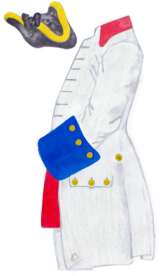