I (Digby Smith) was recently asked to re-draw a series of coloured sketches of the infantry colours of Kurpfalzbayern for Kronoskaf – Project SYW. When I began to examine the original sketches submitted to me, it soon became plain, that they were distorted, some of the heraldry had been misinterpreted and some of the originals seem to have been just tattered remnants, upon which many assumptions had been made, then built. It seems that some of the colours had been wrongly interpreted as well.

There will probably not be a fully accurate reconstruction of these colours, but I have attempted to do what I can.

There are some key heraldic elements of the colours, which I reproduce below. It should also be remembered that there was usually an overall sense of symmetry in these designs, which allowed the inclusion of certain asymmetrical features.

The only coloured sketch which I have rejected as being incredible is that of the Leibfahne of 1760, with the gold decorations around the periphery and the crowned ciphers within the central, white field. I have never seen such a design; the virgin and child are usually the only devices on the white field. It also seems that the original, from which the sketch was made, had large sections ripped out or worn into tatters. I reproduce below some of the key features which help to identify the ages of the other colours and to correct heraldic inconsistencies.

Ciphers of the sovereigns

Charles III Philip, Elector Palatine (born in Neuburg, November 4 1661 – died in Mannheim, December 31 1742) was a ruler from the house of Wittelsbach, Count of Pfalz-Neuburg, and Duke of Jülich and Berg from 1716 to 1742. Until 1728 Charles III Philip was also Count of Megen. The corner ciphers of the colours were the reversed `CP`.

Charles VII Albert (August 6 1697 – January 20 1745) a member of the Wittelsbach family, was Prince-elector of Bavaria from 1726 and Holy Roman Emperor from January 24 1742 until his death in 1745. Charles was notably the only person not of the House of Habsburg to become emperor since the 15th century.

He was followed by Carl IV Theodor, Prince-Elector, Count Palatine and Duke of Bavaria (December 11, 1724 – February 16, 1799). He reigned as Kurfürst and Pfalzgraf and as Herzog of Jülich and Berg from 1742 and also as Kurfürst and Herzog of Bavaria from 1777, until his death. He was a member of the House of Pfalz-Sulzbach, a branch of the House of Wittelsbach. The ciphers on the colours were now the reversed `CT`.

Maximilian III Joseph (March 28 1727 – December 30 1777) was Kurfürst of the Holy Roman Empire and Herzog of Bavaria from 1745 to 1777. He was also Herzog of Zweibrücken on the border with France, and succeeded Carl Theodor in 1799, uniting all the Wittelsbach territories under a single rule in 1799. The Palatinate was dissolved in the Wars of the French Revolution. In 1795 its left bank territories were occupied, and then annexed, by France, then, in 1803, its right bank territories were awarded to the Margrave of Baden. In 1806, at the dissolution of the Holy Roman Empire, the rights and responsibilities of the Kurprinzes disappeared as well and the Rhenish Palatinate, as a distinct territory, disappeared.

Crests on the company colours

The crests on the company colours included the following designs (territorial crests of the components of the Palatinate) at various times; all lions face left or right as viewed.

Now to Digby's reconstructions of the coloured sketches.

Leib-Fahne, Carl Philip, pre-1742. The white cloth would seem to indicate a Leib-Fahne; the corner ciphers are the reversed 'CP'. The three-parts crest is a special form of the younger line of Pfalz-Neuburg and dated back to the beginning of the 18th Century. The collar and cross of the Order of Saint Hubertus and the Collar of the Order of the Golden Fleece are below the central crest. The crowns, ciphers and border decoration are silver. After consulting the a/m references, I have re-drawn the flag, the three central shields contained the following crests:

The ribbon around the two central shields seems to be light blue with silver tassels. 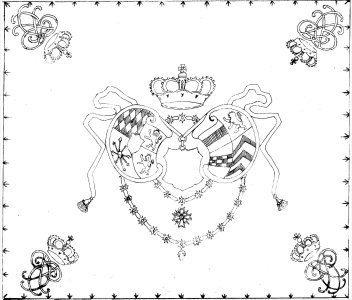 Example of a Leibfahne under Carl Philip before 1742 – Source: Digby Smith

Kompanie-Fahne, Kurpfalz under Carl Theodor, 1757. Carl Theodor succeeded to the throne in 1742 and the ciphers here seem to confirm that. The light blue ground was not a regimental facing colour. The electoral cap should show only five ermine tails. This design is rather unusual. All ciphers (entwined, reversed 'CT') and crowns are gold. 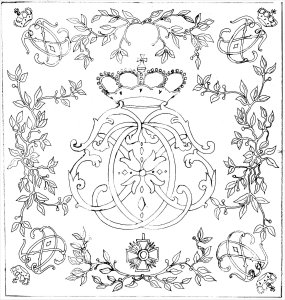 Example of a Kompanie-Fahne under Carl Theodor in 1757 – Source: Digby Smith

Kompanie-Fahne (red pattern), Kurpfalz under Carl Theodor, 1760. This red colour is described as “Palatine-Bavarian company colour for Palatinate regiment, II. battalion 1777”(*). The red cloth seems to have been rectangular, the light blue and white borders are typical of Bavarian heraldry and the central crest and corner ciphers (CT) are shown under the new-pattern electoral cap. The cloth, which was copied, may have been of painted silk and have been viewed in reverse, as all the rampant lions are facing in the wrong direction. The collar of the Order of Saint Hubertus may be seen under the central crest and under the corner ciphers the crosses of the Order of Saint Hubertus. The central shield contained the following crests: 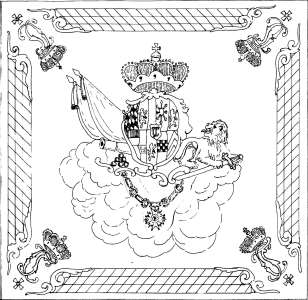 Example of a variant of the Kompanie-Fahne under Carl Theodor in 1760 – Source: Digby Smith

Kompanie-Fahne, (yellow pattern, variant 1), Kurpfalz under Carl Theodor, 1760. This yellow cloth item has been labelled as a Leib-Fahne, which it most certainly is not. It is a company colour, but is far too asymmetrical and seems to have large parts of the source item missing. My previous comments as to the heraldic colouring and the positioning of the rampant lions apply. The wheel of Kleve (a wheel of lily stalks) has been misinterpreted as a 'spread eagle golden lion'. 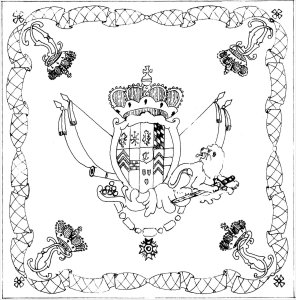 Example of a variant of the Kompanie-Fahne under Carl Theodor in 1760 – Source: Digby Smith

The description of the next variant of the yellow Kompanie-Fahne has been verified against an original at the Bavarian Army Museum at Ingolstadt.

'Kompanie-Fahne (yellow pattern, variant 2), Kurpfalz under Carl Theodor, 1760. This yellow colour is described as “Palatinate company colour I. bataillon under Elector Carl Theodor, pre 1778”(*). The yellow field is surrounded by three rows of white and light blue lozenges. In the corners a variant of the Palatinate-Bavarian crest, surmounted by an electoral cap. The central design is destroyed and bleached out in large parts, but the reconstruction gives the following detail:

Digby Smith for the research, the illustrations and the initial version of this article.