In 1481, Louis XI charged the Sire d'Esquerdes to train the newly raised Bandes Françaises which would form the basis of the future French infantry. On August 17, 1483, Louis XI appointed d'Esquerdes governor in Picardie. The Bandes Françaises followed him in this province where they established themselves for a long period and thus became known as Bandes de Picardie. From 1484 to 1491, the Bandes de Picardie held their ground against the armies of the Holy Roman Emperor, capturing Saint-Omer and Thérouenne.

Between 1494 and 1521, there is no mention of the Bandes de Picardie but they certainly continued to exist.

From 1521, the Bandes de Picardie were involved in several campaigns in Champagne, Genoa and Picardie.

From April 29, 1547, the Bandes de Picardie had a permanent colonel-general. In 1551, the unit was sent to Italy. In 1552, recalled to France, it took part in the conquest of the "Trois-Évêchés" and in the defence of Metz. In 1556, it courageously defended Saint-Quentin but was finally taken prisoners.

The regiment was officially constituted in 1558 by Henri II, from the "Vieilles Bandes Françaises". It ranked first among the French Line Infantry regiments, immediately after the Gardes Françaises and Gardes Suisses. Consequently, it was part of the six French regiments known as Vieux Corps.

The regiment served in almost all the wars that France waged during the XVIIth century.

In 1714, the regiment was placed in garrison in Strasbourg. In 1715, it incorporated the remnants of Saint-Germain-Beaupré Infanterie and Chalmazel Infanterie. In 1717, it was transferred to Thionville.

In 1719, during the War of the Quadruple Alliance, the regiment served on the Spanish border. It took part in the capture of Castelléon, San Sebastian and of the Castle of Urgell. After the war, it was assigned to the troops isolating Marseille during the plague. It then returned to Strasbourg.

In 1722, the regiment was stationed at Besançon. It then successively garrisoned Lille, Cambrai and Saarlouis. In 1727, it took part in the training camp of the Meuse and then returned to Strasbourg. It was later transferred to Givet and Charlemont. In 1730, it returned to Alsace where it occupied Colmar, Schelestad and Brisach. In 1731, it was sent to Languedoc and took up quarters in Nîmes, Montpellier and Perpignan.

In 1733, at the outbreak of the War of the Polish Succession (1733-35), the regiment was sent from Montélimart to Italy where it took part in the siege of Pizzighetone and of the Castle of Milan. In 1734, it participated in the Battle of San Pietro where it lost more than 800 men. Later the same year, it fought in the Battle of Guastalla.

In 1736, the regiment returned to France and was stationed in Nîmes and Montpellier. In 1737, it was transferred to Perpignan but soon returned to Montpellier and the Cévennes.

In 1756, the regiment was at the camp of Dunkerque. It was then sent to Saint-Omer.

In March 1757, the regiment set off from Saint-Omer and marched through Flander and Brabant to join the Army of the Lower-Rhine commanded by the Maréchal d'Estrées for the planned invasion of Hanover. At the end of June, the regiment was at the camp of Bielefeld with d'Estrées's Main Corps. On July 1, under Chevert, a corps consisting of Picardie (4 bns), Vaubécourt (2 bns), Condé (2 bns), an unidentified regiment of Grenadiers Royaux (2 bns), the Carabiniers and 20 guns left Bielefeld. On July 2, they arrived at Hervorden. On July 8, they left for Hoya. On July 26, the regiment took part in the Battle of Hastenbeck. It was leading Chevert's Column who accomplished the flanking movement to attack the Hanoverian left wing in the woods. In this battle, the regiment lost 300 men., including Lieutenant-Colonel de Gascoing, killed; Colonel de Brehant, Captains Chevalier d'Ure, Dallène, Saint-Mauris, Durond, Panisson, Saint-Paul, du Gravier and five lieutenants, wounded. After the victory, from July 31 to August 2, the regiment encamped at Grosselsen near Hameln with the main body of the Army of the Lower-Rhine. After the Convention of Kloster-Zeven, it followed the main body, led by the Maréchal Duc de Richelieu, who encamped at Halberstadt in Prussian territory from September 28 to November 5. In this camp, the regiment was placed in the centre of the first line. At the end of the year, it took its winter-quarters in the first line of the French army in Braunschweig.

In June 1759, during the French offensive in Western Germany, the regiment was part of the main army under the command of the Marquis de Contades and was deployed in the first line, on the right wing of the infantry centre. On July 13, the regiment was part of a corps, under M. de Beaupréau, sent forward by Contades to Eidinghausen near Gohfeld to support Broglie at Minden. On July 14, this corps passed the Weser and marched to the French camp near Minden where it replaced Broglie's Reserve. On August 1, the regiment took part in the Battle of Minden where it was deployed in the first line of the infantry right wing under the command of the Chevalier de Nicolaï. In this battle, the regiment lost Captain de Vidal and Lieutenant de Montagnac, killed; and Captain de Monteil and Lieutenant des Bardes, severely wounded. On August 10, closely followed in his retreat by Allied detachments, Contades formed 2 rearguard detachments near Dransfeld. The regiment was attached to the rightmost of these detachments, under the command of M. de Planta. The Allies first moved against the rightmost detachment but the regiment, along with Belzunce Infanterie formed in battle at the head of the defile, putting a stop to the Allied advance.

On January 3, 1760, the regiment was part of a corps under the Marquis de Vogüé who attacked the town of Herborn, an advanced post of Wangenheim's Corps. In this attack the French took 100 prisoners. The regiment along with La Tour-du-Pin Infanterie then cantoned in the village for the night. By May 23, the regiment was part of the first line of the infantry centre of Broglie's Army. It later took part in the defence of Göttingen. By December 30, the regiment had taken up its winter-quarters in Eschwege.

By February 9, 1761, the regiment was attached to the army of the Duc de Broglie and was posted in second line at Eisenach. In mid-February it was in the area of Sontra under Saint-Pern. In mid-April, it was stationed at Fulda and Schlitz. By May, it formed part of the corps of Prince Xavier

On February 12, 1762, the regiment, along with the Grenadiers de France, was attacked by a superior force under the command of General Spörcken. It sustained a cannonade during five hours, forcing the Allies to retire. In this affair, the regiment lost Major Gelb, Captain de Richemont and Captain de Montlouët, killed. It then campaigned with the Army of the Upper Rhine. On June 24, the regiment was present at the Battle of Wilhelmsthal. By July 12, it was at Landwerhagen under Prince Xavier. On November 20, Louis XV issued his instructions regarding the French armies serving in Germany, specifying which units should return to France right away and which should stay in Germany until the final evacuation. The regiment was among the units which remained in Germany.

From March 1763, the regiment was stationed in Strasbourg. 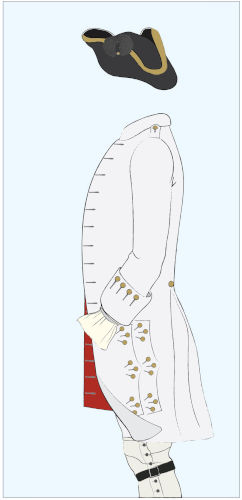