In 1758, during the Battle of Zorndorf, Frederick II had seen Russian light artillery pieces with mounted crews attached to cavalry units.

With a Cabinets-Order of April 21, 1759, a brigade (equivalent to a company) of 6 six-pdr guns of artillerie volante or reitende Artillerie (horse artillery) was ordered to form in the King’s Army: officially May 1 of that year could be established as Foundation Day of the Horse Artillery. The formation of the brigade took place in Landeshut and it was placed under the command of Lieutenant Zchwebs. This horse artillery brigade was attached to the Jung-Platen Dragoons. Each gun had a 6-horse team.

According to the posthumous memoir of Field-Marshal Count Kalkreuth, which was was adjutant of Prince Heinrich during the war, at the same time a second brigade was formed in the Prince's army: however it seems that the formation of this unit must be postponed in the year 1760, when Prince Heinrich army was camped, from June 19 to July 12 near Landsberg (present-day Gorzow Wielkopolski) on the Warthe (present-day Warta).

According to the existing traditions taught after the war, Major Kienbaum from the Bayreuth Dragoons supervised the riding training of the Landeshut brigade team daily, often under the eyes of the King. To attach the brigade to one of the dragoon regiments was a measure probably done for both protection and monitoring. The brigade of Prince Heinrich was similarly trained at Landsberg.

The war performance of the horse artillery is based only on very sparse data: in particular we have no information on the march dispositions and the battle reports, which deals often in some details about the position of foot artillery, usually pass over in silence the horse artillery. The information about its use can be found only scattered here and there.

The equipment and organization of the brigade, according to the various sources, consisted of 6 or 10 6-pdr guns; however it seems that at some time part of the horse artillery, even temporarily, was equipped with 3-pdrs. Indeed a reports of Colonel von Dieskau to the King in 1771 lists still 22 6-pdr and 16 3-pdr guns present. The composition of 5 guns with a single 7-pdr howitzer occurred only once in the sources. The horse artillery 6-pdrs are always referred to as of the "light" type. As far as the personnel is concerned, the "Landeshut" brigade had only one officier, the Lieutenant Zchwebs, and:

The supply in the ammunition limber seems like that of foot artillery, 80 Ball and 20 Shrapnel-shots.

In the Spring of 1760, the brigade was raised for a third time under Lieutenant Wilhelmi von Anhalt and Hartmann (the former reorganized the whole horse artillery in the later stages of the war).

At the end of the war, these 2 brigades of Horse Artillery were disbanded.

The first brigade of Horse Artillery was attached to the King's Army at the camp of Schmottseifen. Its first action was under the orders of the Duke of Württemberg on August 2, 1759, against Hadik's Corps at Markersdorf (present-day Markosice). Then it took part in the bloody Battle of Kunersdorf where it was taken prisoners by the Russians.

The brigade was reorganized at the camp at Fürstenwalde; it was attached to Lieutenant-General Finck corps and moved to Saxony. Then, still under Finck it was with the Prince Heinrich Army (it appears in a report on October 12 in the camp at Strehla). On October 29, it fought with distinction at Pretzsch. Again in the Finck's corps, it was present at the action of Wendisch Bohra (present-day Wendischbora) and, on November 11, at the Battle of Maxen, where it was taken prisoner again.

For the campaign of 1760, according to Tempelhof, the horse artillery received 10 guns, under the orders of lieutenants ‘’Wilhelmi’’ von Anhalt and Hartman. However at the opening of the campaign, only the Prince Heinrich newly-formed brigade at the camp of Landsberg was present with a force of 4 guns, attached to the Bayreuth Dragoons. Towards the end of August, these guns were transferred, with the larger half of the Prince's troops, to the Frederick's Army, and increased to 10 guns (probably including two 7-pdr howitzers). Indeed the horse artillery is not mentioned neither at Göda (July 7) nor at the Battle of Liegnitz (August 15).

The brigade of 10 guns (from then on, its official strength) was then attached to the army of the King until the end of the campaign, remaining almost always at the headquarters or being used in support of the cavalry in avantgarde or rearguard roles. Such a role seems to reflects both the view of the King regarding the most appropriate tactical role of the horse artillery and his fear to lose it again in frightful way as it happened at Kunersdorf. Indeed, on November 3, at the Battle of Torgau, the brigade was with the fourth column together with 1 battalion and 25 squadrons to cover the war chest and the heavy baggage at Eilenburg.

The Prussian Army begun the 1761 campaign with only one brigade of 10 6-pdr guns raised the previous year which spent most of the campaign with the King’s Army. On July 20, 4 guns were detached to Goltz's Corps at Glogau. On August 20, the reunited brigade was with the King at Kunzdorf and then at the Bunzelwitz camp. The position of the brigade within the camp is unknown. As soon as the siege of Bunzelwitz was lifted, on September 11, the King despatched Lieutenant-General von Platen to a raid against Russian magazines in Poland with a force which comprised also 4 guns from the horse artillery.

While the larger half of the brigade, which remained until the end of the campaign in the King’s army, was offered no opportunity to achieve great things, the detached guns saw many actions against the Russian, first at Kobylin, then at Gostyn and then when the Platen corps was back to Colberg in the campaign for the defense of the city, being back to Saxony only in the middle of March 1762.

In the 1762 campaign the horse artillery strength attained its maximum of 22 guns with 11 NCOs and 176 artillerymen, nearly 1/30 of the whole artillery. Of this force, sixteen 6-pdr guns were with the King’s Army whereas five 6-pdr guns and one 7 pdr-howitzer arrived in January from Pomerania to the army of Prince Heinrich.

The horse artillery involvement was documented at least in the following action: at the Combat of Adelsbach, on July 6, six guns from the King’s Army were placed at the foot of the Engelsberg. On July 21, before the Battle of Burkersdorf, 2 horse guns were added to a cavalry corps of 20 squadrons, which was sent to observe the Austrian entrenchments at Silberberg. Finally, the whole horse artillery of the King’s Army was present at the Battle of Reichenbach, where it gave its best performance in the whole war. Until the surrender of Schweidnitz such brigade had nothing more to do and accordingly 6 guns were attached to the Wied's Corps in Saxony. Of the remaining 10 guns, 4 were detached to the Duke of Bevern troops until the end of the campaign.

On May 25, the Prince Heinrich's brigade was at the camp at Pretschendorf. In June the howitzer and two cannon were detached under Lieutenant-General von Seydlitz, whereas the 4 remaining guns participated in Major-General von Kleist small raid in Bohemia at the beginning of July. On July 21 at Kirchberg, the horse artillery under von Seydlitz broke an Austrian action by Kleefeld aimed to cover the Reichsarmee retreat.

In the action at Nassau on September 29, the horse artillery was present in Seydlitz's and Kleist's commands. Eyewitness confirm the presence of the horse artillery at the October 14 and 15 actions, whereas it is impossible to know if the brigade was at the Battle of Freiberg, or participated in Kleist's incursion into the Reich. It is only known from the "Dislocations" lists that the Prince Heinrich brigade took up its winter-quarters in Leipzig whereas that of the King was in Pegau. 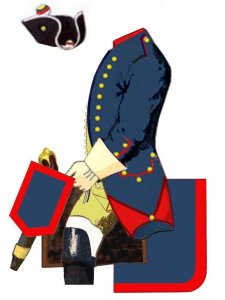 Uniform in 1759 - Source: Frédéric Aubert from a template made by Richard Couture

Officers had hat wearing a golden lace. They also wore a black and silver sash around the waist. They carried an officer stick. They had white neck stocks and silver gorgets (decorated with a Black Eagle on a white shield surrounded by agilt trophies of arms). Their coats were similar to those of the privates but had no turnbacks. Their waistcoats were edged in gold. 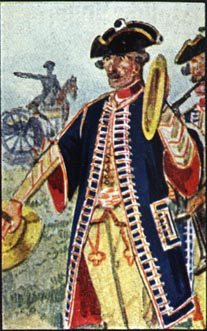 There was only one colour for the entire Field Artillery, including the Horse Artillery. It was not carried in the field but rather kept at the arsenal.