The regiment was raised in 1692 by Colonel Paul von Brandt as a regiment of dragoons by addition of companies from existing regiments.

During the War of the Spanish Succession (1701-13), the regiment served in Brabant and Flanders, and was present at many sieges.

From 1716, the regiment was stationed in the Duchy of Magdeburg.

In 1718, the regiment was converted to a cuirassier regiment of 5 squadrons.

At the outbreak of the War of the Austrian Succession (1740-48), the regiment initially served against Austria. On April 10, 1741, it fought in the Battle of Mollwitz where it suffered heavy losses. From September 10 to 16, 1744, it covered the siege of Prague. In 1745, it fought in the battles of Hohenfriedberg (June 4) and Kesselsdorf (December 15).

Magdeburg was the inspectorate of the regiment and its garrison places were Genthin, Havelberg, Loburg, Neu-Haldensleben, Rathenow, Sandau and Wolmirstedt.

By 1806, the regiment was still known as the “Leib-Carabiniers”. That year, on October 14, it took part in the Battle of Auerstädt where it was deployed in the Prince of Orange's right wing. It suffered heavy losses. On October 29, the regiment surrendered at Pasewalk and was not re-raised. The depot went into the new 4th Kürassiers.

On August 26 1756, when the Prussian army proceeded to the invasion of Saxony, the regiment was part of the centre column led by Frederick II. More precisely, it belonged to Keith's Corps. The centre column had concentrated at Brietzen and advanced unopposed upstream along the Elbe River by Torgau and Wittenberg, leaving Meissen to its left. On September 6, it encamped at Rothschönberg and finally reached Wilsdruf. On October 1, the regiment took part in the Battle of Lobositz where it was assigned to the cavalry brigade of Major-General Schonaich in Kyau Division. On October 23, when Keith's Army left Lobositz to return to Pirna country, the regiment joined Frederick at Linai to cover Keith's advance. On October 28, the whole force reached Gross-Sedlitz near Pirna and the regiment took up its winter quarters soon afterwards.

In March 1758, the regiment took part in the invasion of Moravia. From May 27 to July 2, it covered the Siege of Olmütz. It also fought in a skirmish at Wischau. On August 10, the regiment was part of the corps who accompanied Frederick when he marched from Silesia to join Dohna to contain the Russian invasion of Brandenburg. On Tuesday August 22, this corps made a junction with Dohna at Manschnow. On August 25, the regiment fought in the Battle of Zorndorf. Around 3:00 p.m., it counter-charged and drove off the Russian cavalry attacking the Prussian extreme right wing. For this action, all field officers of the regiment were awarded the Pour-le-Merite. On September 2, a week after the battle of Zorndorf, when it became clear that the Russian army was slowly retiring towards Landsberg, Frederick assembled the corps that he had brought with him from Silesia and left for Saxony where his help was badly needed. On October 10, the regiment took part in the Battle of Hochkirch where it was deployed in the centre of the first line in [[Zieten, Hans Joachim von|Zieten]'s Cavalry Corps. During this battle, it took 3 standards.

At the beginning of the campaign of 1759, the regiment encamped at Schmottseiffen where it remained for most of the campaign. On September 5, it marched to Saxony under the command of [[Friedrich Heinrich Ludwig|Prince Heinrich].

On February 15, 1761, the regiment took part in the Combat of Langensalza, taking 2 cannon. 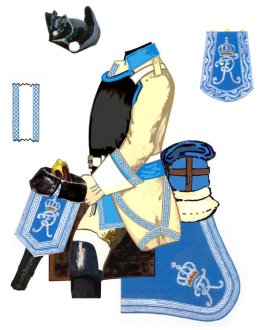 Troopers were armed with a heavy straight-bladed sword, a pair of pistols and a musket. They wore a blackened breastplate edged light blue and fastened by leather straps. The musket strap was white edged with the regimental lace.

N.B.: the white dress coat had light blue lapels, cuffs and collar and a silver aiguillette on the right shoulder; and was decorated with silver embroidered button loops.

The apron of the kettle-drum was made of light blue damask embroidered with silver floral patterns and carriewd two black eagles. It was fringed in silver.

The square standards were made of damask. The cords and tassels were silver and black. The pole of the standard was a royal blue tournament lance reinforced with iron hinges and gold finial.

The standard bearers had light blue standard bandoliers, edged and fringed in gold.

The 5 standards were lost on October 29 1806 at the capitulation of Pasewalk. The regiment was not re-raised.