The regiment was created on September 16 1684 and took the name of the province of Quercy. Indeed, expecting a Coalition to soon form against France, Louis XIV raised 30 new regiments from September 1 to 30 for the defence of the various places of the realm. By raising one regiment a day, he avoided any problem of precedence among these new regiments.

During the first campaigns of the Nine Years' War (1688-97), the regiment remained in garrison on the frontier of the Alps. In 1692, it took part in the defence of Embrun. In 1693, it took part in the Battle of Marsaglia. In 1694, it was placed in garrison in Pinerolo. In 1696, it was transferred to the Rhine where it served till the end of the war.

In December 1700, on the eve of the War of the Spanish Succession (1701-13), the first battalion was sent to Italy. On February 1, 1701, the regiment, which initially counted a single battalion, was increased to two battalions. In 1702, the grenadiers of the first battalion distinguished themselves at the Combat of Santa Vittoria. In 1703, the first battalion took part in the offensive in South Tyrol; in 1705, in the sieges of Verrua and Mirandola and in the Battle of Cassano; in the Battle of Calcinato, in the siege of Turin and the Battle of Castiglione; in 1707, in the defence of Provence and Dauphiné; and in 1708, in the capture of Césane. It then continued to serve in the Alps. Meanwhile, the second battalion initially served in Flanders from 1701 to 1703. It then served on the Moselle from 1703 to 1710. In 1711, the entire regiment was reunited in Dauphiné. In 1714, it was sent to Catalonia where it took part in the siege of Barcelona. After the capture of Barcelona, the regiment was reduced to a single battalion.

On 30 July 1715, the regiment incorporated part of the disbanded Vallouze Infanterie.

In 1727, the regiment took part in the training camp on the Saône.

In October 1733, at the outbreak of the War of the Polish Succession (1733-35), the regiment was sent to Italy. The same year, it took part in the sieges of Gera d’Adda, Pizzighetone and Milan; in 1734, in the capture of Serravalle, Novara and Tortosa, in the combat of Colorno, in the battles of Parma and Guastalla, and in the siege of Mirandola; and in 1735, in the reduction of Gonzague, Reggiolo, Revere and Guastalla. In September 1736, the regiment returned to France.

In 1742, during the War of the Austrian Succession (1740-48), the regiment was initially stationed on the Alpine frontier. In 1743, it took part in the attack on the entrenchments of Chenal and in the capture of the Castle of Pont; in 1744, in the capture of the Lines of Montalban and Villefranche, in the passage of the Alps through the Stura Valley, in the reduction of Château-Dauphin and Démont, in the siege of Coni and in the Battle of Madonna dell'Olmo; in 1746, in the defence of Provence and in the relief of Antibes; in 1747, in the attack on the entrenchments of Montalban an Villefranche and in the occupation of Nice and Vintimiglia.

During the Seven Years' War, the regiment ranked 85th and was under the command of:

On April 30, 1762, the regiment was increased to two battalions. On December 30 of the same year, it was assigned to the service of harbours and colonies.

On September 11, 1758, the regiment took part in the Combat of Saint-Cast. While Boulonnais Infanterie threw itself against the left of the British positions, the regiment marched at the head of the column of attack on the other wing. It was a lieutenant of the regiment, followed by 15 grenadiers, who was the first to penetrate into the British entrenchments.

In 1760, the regiment was part of the tardy reinforcements sent to the defenders of the French colonies. It was placed in garrison in Saint-Domingue where it would remain until 1766, well after the end of the war. 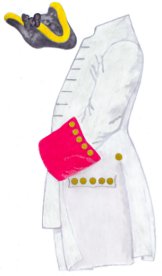