On the eve of the War of the Austrian Succession, in 1740, the duke Francesco III of Modena raised the Rangoni Dragoons consisting of about 180 men in 2 squadrons.

During the War of the Austrian Succession, after the invasion of the Duchy of Modena by an Austro-Piemontese arme, the regiment was disbanded.

In 1747, the regiment was re-raised as a military police force.

In April 1759, after the appointment of the Duke Francesco III as governor of Milan by Maria Theresa, there were some 2,700 Modenese soldiers in the territory of Milan assuming garrison duties. This force included 2 squadrons (about 280 men) of the regiment, the last squadron remaining in the duchy of Modena. 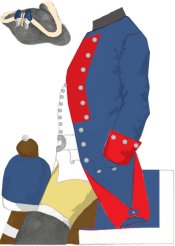 Troopers were armed with a sword, a pair of pistols and a carbine.

The officers wore the same uniform as the troopers decorated with the royal lace (alternating light blue and white squares) on the edges and seams.

The drum barrel was made of brass and decorated with turquin blue points edged white.