The regiment originated from the “Guardia Real de Caballeria” created in 1697 for King Charles II. On January 11 1703, Philip V, the new king of Spain, disbanded this regiment, incorporating its 22 companies into the newly raised “La Reina” cavalry regiment. On April 24 of the same year, “La Reina” was itself split into two distinct regiments: “La Reina” and “Real Asturias”, each counting 11 companies. These two regiments obtained precedence over all other line cavalry regiments.

The colonel of “La Reina” raised a twelfth company at his own expense and subdivided his regiment in three squadrons.

In 1703, during the War of the Spanish Succession, the regiment escorted the king to Toledo and then marched to Talavera where it joined the Army of Extremadura. In 1704, the regiment took part in the campaign in Portugal, in the capture of Salvatierra and in the Combat of Monsanto; in 1705, in the relief of Monsanto and in the relief of Badajoz; in 1706, in the combat of Brozas and in the campaign of Atienza; in 1707, in the Battle of Almansa, in the capture of Valencia, in the combat of San Mateo, in the storming of Ulldecona and in the reconquest of Lérida; and in 1708, in the siege of Tortosa. In 1709, the regiment was stationed in the District of Valencia. In 1710, it took part in the battles of Almenar, Saragossa and Villaviciosa. In 1711, the regiment entered into Catalonia with the army and formed part of the garrison of Lérida. In October, the regiment surprised and captured a convoy arriving from Termens. In 1712, it was employed in Catalonia and in Lérida. In 1713, it fought against the Catalan insurgents and took part in the blockade of Barcelona. In 1714, it was at the blockade, siege and capture of Barcelona.

In 1715, at the end of the war, the regiment remained in the District of Catalonia.

In 1719, the regiment was transferred to the District of Navarra where it took part in the campaign against France where Spain lost Fuenterabia and San Sebastian.

On July 7 1732, the regiment embarked at Alicante for Africa for the reconquest of Oran which had been taken by the Moors in 1708. After the capture of the place, it returned to Spain on August 6.

In 1733, during the War of the Polish Succession (1733-35), the regiment marched to Catalonia where it was stationed in Sabadell. On December 23, it left Spain to take part in the expedition in Tuscany. In 1734, it embarked at Antibes for Oratorio where it landed on March 30. From May 9, it took part in the occupation of the Kingdom of Naples. It was then sent to Tuscany. In 1735, it contributed to the surrender of Porto Ercole and Orbitello, fought in the action of Quingentalli and took part in the siege of Mirandola. In 1736, it re-embarked for Spain where it was quartered in Villafranca de Panadés.

In 1758, the regiment took up quarters in Búrgos.

In 1762, the regiment was sent to occupy the line covering Gibraltar. His commander vainly asked for the transfer of his regiment to the army assembling in Extremadura.

In 1763, the regiment was stationed in the camp in front of Gibraltar. 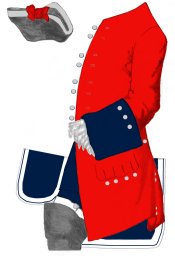