The regiment was created on June 15 1735 in Guadalajara by Colonel Don Juan Pacheco from pickets supplied by regiments garrisoning Ceuta (Toscana, Lisboa and Murcia). It was designated as “Regimiento Real de la Reina”. The regiment was then sent to Extremadura.

In 1737, the regiment was cantoned in Trujillo when it was ordered to go to Cádiz to assume garrison duty.

In 1740, on the eve of the War of the Austrian Succession, the regiment embarked for Tuscany to join the army assembling under the Count of Montemar for the reconquest of Lombardy. It disembarked at Orbitello. In 1741, it was at the camp of Rimini. In 1743, it took part in the Battle of Campo Santo before retiring to Naples. In 1744, it bravely defended its positions at Fayola. In 1745, it took part in the attack on the entrenchments of Bocheta, in the siege and capture of Tortona, in the Battle of Bassignano and in the blockade of Milan. In 1746, it retreated to La Spezia and then fought in the Battle of Piacenza and in the Battle of Rottofreddo before retreating the the County of Nice. It was then transported to Naples where it remained until 1749.

In 1763, the regiment was transferred to Central America.

In 1769 the regiment was disbanded after a mutiny in Panama.

In May 1761, the regiment, who was garrisoning Cádiz, was transferred to Ceuta on the coast of North Africa, 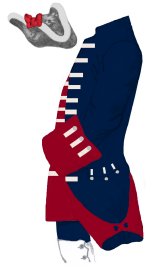 The coronela (colonel flag) of the regiment was white with a red Burgundian cross terminated in each corner by a medallion carrying the arms of the regiment (unknown) surmounted by a golden crown. In the middle: the arms of Charles III surrounded by the necklace of the order of the Toison de Oro (Golden Fleece).

The batallonas (ordonnance flags) of the regiment were white with a red Burgundian cross terminated in each corner by a medallion carrying the arms of the regiment (unknown) surmounted by a golden crown.