This Scottish regiment was raised by John Lord Drummond of Perth on August 1 1744, assembling at Saint-Omer. It had the same organisation as an Irish regiment: 11 fusilier companies and 1 grenadier company for a total of 600 soldiers.

During the War of the Austrian Succession, the regiment initially served in Flanders in 1745, taking part in the sieges of Tournai, Gand, Oudenarde, Ostend and Nieuport. At the end of November, the regiment joined a French expeditionary force who sailed for Scotland to reinforce the Scottish army of the Young Pretender. On January 17 1746, part of the regiment fought in the Battle of Falkirk. In February of the same year, a second battalion was raised in Scotland. On April 16, it was present at the Battle of Culloden, one of its battalion being taken prisoners soon after the battle. The other battalion retired from the battlefield but was forced to surrender on April 19. All prisoners were eventually exchanged and the regiment reconstituted in France with 11 fusilier companies and 1 grenadier company. It then consisted of a single battalion. In 1747, it was back to Flanders where it took part in the siege of Bergen op Zoom from July to September. In August of the same year, it was increased to 13 companies with the addition of a new fusilier company. Each fusilier company consisted of:

...while the grenadier company consisted of:

In May 1748, the regiment was at the capture of Maastricht. In December of the same year, the regiment incorporated part of the soldiers of the disbanded Albany Infanterie but still consisted of a single battalion.

During the Seven Years' War, the regiment ranked 107th and was under the nominal command of King Louis XV, effective command being assumed by the lieutenant-colonel:

On December 21 1762, when the French infantry was reorganised, the regiment was disbanded and its troops incorporated into Bulkeley Infanterie.

By August 1 1757, the regiment was garrisoning Gravelines in Flanders.

It then served on Belle-Isle until May 1760 when it was transferred to Germany.

By May 23 1760, the regiment was part of the first line of the infantry centre of Broglie's Army. On August 21, Allied hussars captured a French outpost at Rhoden defended by 1 officer and 30 men of the regiment. By December 30, the regiment had taken its winter-quarters in Marburg. 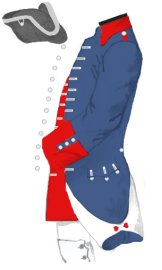 N.B.: grenadiers wore a Highlander uniform. However, we have found no description of this uniform nor of its tartan.

Bunel, Arnaud: Vexillologie militaire européenne - Régiment Royal-Ecossais (a website which has unfortunately disappeared from the web)