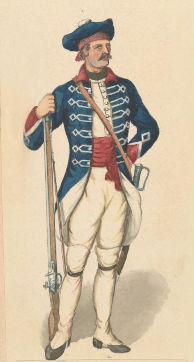 The unit was raised on December 15, 1745 in the Basque countries of Labourd and Basse-Navarre (Bayonne, Hendaye, etc.) by Colonel Chevalier Jean-Philippe de Bela as a light infantry unit for mountain warfare. The unit was originally known as the “Volontaires Cantabres” and initially consisted of one battalion of 504 men (10 companies, each of 50 men). Officers had to belong to the countries beyond the Adour and the County of Armagnac.

During the War of the Austrian Succession (1740-48), the unit served in Flanders. In 1746, it was present at the siege of Bruxelles and at the Battle of Rocoux. On July 1, 1747, the “Volontaires Cantabres” became a regiment under the name of “Royal Cantabre.” This regiment consisted of infantry and cavalry: 1,604 foot (including 2 grenadier companies, each of 50 men and 16 fusilier companies, each of 75 men) and 324 hussars (6 companies, each of 1 captain, 1 lieutenant, 1 cornet, 1 quartermaster and 50 hussars) with two field guns. At the end of the war, on December 1, 1748, the regiment was reduced to 450 foot and 50 hussars with only one colour.

On August 1, 1749, a new ordonnance disbanded the regiment, leaving only 4 free companies of 2 officers and 40 fusiliers each under the name of “Cantabres-Volontaires.”

On July 8, 1757, the unit was incorporated into the French regulars as Royal-Cantabre. It counted a single battalion of 642 men (including staff) and consisting of:

Finally, on November 1, 1760, the battalion counted 720 men (excluding staff) and consisted of:

During the Seven Years' War, King Louis XV was the nominal colonel of the regiment while its successive colonels-lieutenants were:

The regiment was disbanded on November 25, 1762. Sergeants, corporals, anspessades, fusiliers and drummers who asked for it were allowed to serve in the artillery or in the Boulonnais, Foix or Quercy infantry regiments stationed at Saint-Domingue. The grenadier companies were incorporated into the Grenadiers de France till the end of their appointment.

In 1756, the four free companies took part in the French expedition against Minorca and in the Siege of Fort St. Philip, where Captain de Castera was wounded on May 22. On October 19, the four companies were regrouped in a regiment.

In 1757, after its incorporation into the French regulars, the regiment was stationed in Auch.

By June 1761, the unit had joined Soubise's Army of the Lower Rhine. By August 10, it counted 685 in a single battalion. In November, it was part of Andlau’s Corps posted in the district of Liège, in the camp of Cornelimunster, in the Country of Roermond and along the Meuse from Venlo to Aachen.

In 1762, the unit formed part of the French Contingent sent to the assistance of Spain for the planned invasion of Portugal. 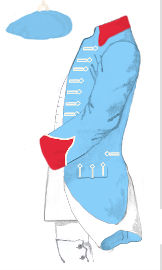 Soldiers were armed with a musket, a bayonet and a Hungarian sabre.

NCOs wore the same uniform as the rank and file but with silver lace instead of white lace.

Officers wore uniforms similar to those of the rank and file with the following distinctions:

Drummers wore a scarlet beret with a dark blue coat.

The colonel flag was white with a white cross bearing the crowned arms of Navarre surrounded by a laurel wreath in its centre. Each canton consisted of a plain white triangle and a white triangle decorated with 16 golden fleurs de lys.

Ordonnance flags had a white cross bearing the crowned arms of Navarre surrounded by a laurel wreath in its centre. Each canton consisted of a plain red triangle and a blue triangle decorated with 16 golden fleurs de lys.