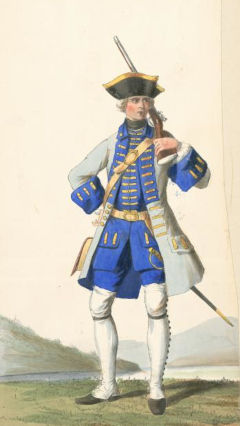 The regiment was raised on April 27, 1671 in Italy and Piedmont by the Count Magalotti, formerly captain in the Gardes Françaises, according to a commission issued on March 27 of the same year. It initially consisted of 27 companies, each of 204 men. Louis XIV was so satisfied when he inspected the regiment that he immediately decided to name it “Royal-Italien”. On the same occasion, he decided to dress the regiment with brown uniforms (the same colour as the justaucorps that he was wearing on the day of the review).

In 1741 and 1742, during the War of the Austrian Succession (1740-48), the regiment was attached to the army of observation of Flanders. In 1743, the regiment was sent to the Rhine and then retired to France. In 1744, it was thrown into Strasbourg and later contributed in the recapture of Wissembourg and of the Lines of the Lauter and in the siege of Freiburg. In 1745, it was recalled to Flanders where it participated in the siege of Ostend. In 1746, it assumed garrison duty in Alsace. In 1747, it campaigned in Provence before being sent to Genoa in Italy. On July 1 of the same year, the regiment was increased to two battalions. It then took part in the defence of Genoa. In 1748, it took part in the defence of Voltri.

In November 1748, the regiment returned to Antibes in France. In March 1749, its two weak battalions were merged into a single one.

During the Seven Years' War, the regiment ranked 48th, it was under the nominal command of king Louis XV and under the effective command of:

On December 21 1762, the regiment was increased to 2 battalions by the incorporation of the disbanded Royal Corse Infanterie.

In 1756, the regiment mustered at Toulon for the preparation of the expedition against Minorca. It distinguished itself at the siege and capture of Fort St. Philip of Mahon. For the attack of June 27, it formed the head of the centre column which advanced against the western lunette and the Carolina Redoubt. The signal for the attack was given at 10:00 p.m. In a wink, the regiment made itself master of the covert way, cut down the palisade and nailed twelve guns, braking down their carriage. In this affair, the regiment lost Captain de Modène, Colonel d’Elva, Captains Patrizzi, Pierardi, Comte Monaldi, Tenesoli, Marquis Botta and Grenadier Lieutenant Cancelli, all wounded. After the conquest of Minorca, it remained in the island.

By August 1 1757, the regiment was still stationed in the island of Minorca. It was later transferred to Corsica to quench troubles.

In 1759, it returned to Minorca where it garrisoned Ciutadella until 1762.

In December 1762, the regiment returned to Perpignan in France where it assumed garrison duty. An ordonnance dated December 21, 1762, increased the regiment to two battalions by the incorporation of the disbanded Royal Corse Infanterie.

Until 1750, the regiment had a brown uniform with red distinctives. 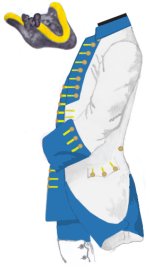 N.B.: Raspe, at the end of 1760, illustrates a medium grey uniform instead of a grey-white one. 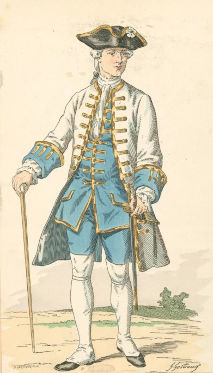