On December 24, 1669, Louis XIV created two regiments (each of 2,000 men) from Compagnies franches de la Marine (marine free companies) for the security of his vessels. The regiment “Royal de la Marine” was one of these. It was attached to the “Ponant Fleet” serving on the Atlantic ocean and assembled in Bretagne in 1670 under the Marquis de Lavardin. In August 1670, 6 companies embarked at Brest for service with Duquesne's Fleet in an expedition to the Canary Islands and Cape Verde Islands. On March 11, 1671, these companies returned to Brest. Meanwhile the rest of the regiment had campaigned in Lorraine in 1670, contributing to the capture of Épinal and Chasté.

In 1671, the regiment went to Amiens where an army was assembling. Thus, circumstances led this regiment to assume service with the army instead of the navy.

In 1672, at the outbreak of the Franco-Dutch War (1672–78), the regiment was at the capture of Orsoy and Rheinberg, at the passage of the Rhine, at the submission of Utrecht and Doesburg. In 1673, it took part in the conquest of part of the Electorate of Brandenburg; in 1674, in the battles of Sinzheim, Ensheim, Mulhausen and Turckheim, in the storming of the churchyard of Germersheim, in the retreat on Altenheim, in the combat to pass the Rhine and in the relief of Haguenau and Saverne. In 1676, the regiment took part in the sieges of Condé and Bouchain and in the Combat of the Kokersberg; in 1677, in the combat of Cassel and in the siege of Freiburg; in 1678, in the attack of the entrenchments of Seckingen, in the capture of Kehl and in the blockade of Strasbourg. A detachment also served with the Army of Flanders and fought in the combat of Saint-Denis. In 1679, the regiment served on the Rhine and was at the combat of Minden.

In 1683, the regiment took part in the training camp of Bouquenom on the Sarre.

In 1684, the regiment covered the siege of Luxembourg.

In 1688, at the beginning of the Nine Years' War (1688–97), the regiment took part in the capture of Philisbourg, Mannheim and Frankenthal; in 1689, in the combat of Walcourt; in 1690, in the storming of Waldkirch near Offenburg. In 1691, it was transferred to the Alps where it took part in the capture of Nice, Villefranche, Montalban, Veillane, Carmagnola and Montmélian. In 1692, it returned to the Meuse and participated in the siege of Namur. In 1693, it campaigned on the Rhine. In 1694, it was back in the Alps. In 1697, it campaigned on the Meuse.

On 30 December 1698, the regiment incorporated Sézanne Infanterie, initially raised in 1695 from militia.

In 1733, during the War of the Polish Succession (1733-35), the regiment joined the Army of the Rhine and took part in the siege of Kehl. In 1734, it participated in the attack of the Lines of Ettlingen and in the siege of Philisbourg; and in 1735 in the Battle of Klausen.

In 1736, the regiment was stationed at Brest.

In 1754, the regiment took part in the training camp at Gray.

During the Seven Years' War, the regiment ranked 44th and was under the king's nominal command. However, the lieutenant-colonels who effectively commanded the regiment were:

In 1756, the regiment took part in the amphibious expedition against Minorca and in the capture of the Fortress of St. Philip where it was at the head of the second attack on the right directed against the south-west lunette and Fort St. Charles. Captain de Caradeuc was wounded during the attack of June 27. The regiment then garrisoned the Fortress of St. Philip till 1763.

In January 1763, the regiment returned to France and was immediately sent to Lorient. In May, it embarked for Martinique Island where it would serve until 1768. 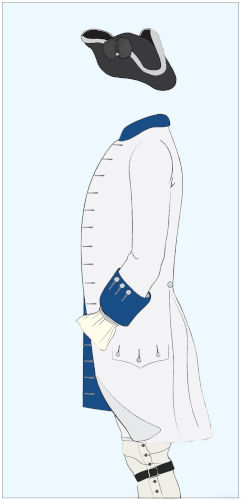 Officers had silver button loops on the sleeves, the collar and the waistcoat.