After the Battle of Fleurus, fought on July 1, 1690, Henri Leisler, of German origin, who was serving as captain in the Swiss Stuppa-Jeune Infanterie, obtained a commission dated August, 1 1690, to raise a regiment of German infantry from the numerous prisoners taken at Fleurus. Leisler thus organised ten companies, mostly composed of the 500 men of an excellent Swedish regiment formerly in the Dutch service. All colonels who would later succeed to Leisler would be Swedes. Leisler brought with him several officers who had served with him in Stuppa-Jeune Infanterie.

In 1698, the regiment was reduced to six companies.

In 1733, during the War of the Polish Succession (1733-35), the regiment occupied Nancy and Lorraine. On November 1 of the same year, it was increased to three battalions. In 1734, it took part in the capture of Trier, Trarbach and Philisbourg; and in 1735, in the Battle of Klausen.

In 1737, the regiment was at Strasbourg. On January 8, it was once more reduced to a single battalion.

On May 15, 1741, during the War of the Austrian Succession (1740-48), the regiment was increased to two battalion. In 1742, it took part in the invasion of Bohemia, in the relief of Frawemberg, in the capture of the Castle of Wodnian, in the Combat of Sahay and in the defence of Prague. For its behaviour during the siege, the regiment received the title of “Royal Suédois” on October 30, 1742. In 1743, the regiment served in Bavaria and took part in the defence of Eger before retreating to France. In 1744, it took part in the recapture of Wissembourg in Alsace and of the Lines of the Lauter, in the Combat of Augenheim, in the attack on Donauworth. In 1745, it fought in the Combat of Pfaffenhoffen in Alsace. In 1746, it took part in the Battle of Rocoux. On November 12 of the same year, it was increased to four battalions. In 1748, it was at the siege of Maastricht. On December 26 of the same year, it was reduced to three battalions.

On February 1, 1749, the regiment was reduced to two battalions. It had prévôté (provostship).

During the Seven Years' War, the regiment ranked 95th and was under the command of:

On January 18, 1760, when the German Infantry was reorganised, the regiment was increased to three battalions by the incorporation of Royal Pologne Infanterie. On December 21, 1762, it was once more reduced to two battalions.

In 1756, the regiment was sent to the camp of Dunkerque.

In 1757, the regiment joined the Army of the Lower Rhine commanded by the Maréchal d'Estrées for the planned invasion of Hanover. On April 16, the regiment arrived at Cologne. At the end of June, it was at the camp of Bielefeld with d'Estrées's main corps. On July 26, the regiment was at the Battle of Hastenbeck where it supported the leading columns of the left wing. In this battle, it lost Lieutenant Dahestierna, killed; and Captain Dalheim, wounded. The regiment then took part in the invasion of Hanover and contributed to the capture of Minden and Hanover. At the end of the year, it took up its winter-quarters in the second line of the French army at Neustadt am Rübenberge.

At the end of January 1758, the regiment was assigned to the army that Louis XV planned to send to Bohemia for joint operations with the Austrian Army. However in February, when an Allied army led by Ferdinand of Brunswick launched a winter offensive in western Germany, the regiment retired to the Rhine with the rest of the French army. From March 30 to April 4, it was in the second line of Clermont's Army in the camp of Wesel on the Lower Rhine. On June 12, it took part in the Combat of Alpen, near the canal of Rheinfeld. By July, it had been transferred to Soubise's Army assembling near Friedberg in Hesse. It later took part in the capture of Kassel.

On April 12 1759, as part of Broglie's Army, the regiment bivouacked near Bergen. Broglie immediately deployed the regiment in the orchards near Bergen. On April 13, the regiment took part in the Battle of Bergen where it formed part of the first line of the right wing under the command of Prince Camille de Lorraine. The regiment was among the infantry entrenched in the village of Bergen. Around 10:00 a.m., it was heavily involved in a fire fight against Allied units advancing against Bergen and drove them back.

In 1763, when the regiment returned to France, it was placed in garrison at Huningue. In May, it was transferred to Fort-Louis where it remained until November 1764. 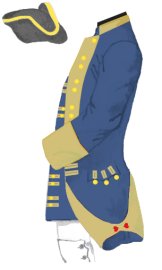 All officers had to be Swedes.

no information found concerning their uniform

N.B.: the manuscript of 1757 depicts colours resembling those of 1760 with only a few differences:

On January 18 1760, when the German Infantry was reorganised, the colours of the regiment changed.

Colonel colour: white field sown with golden fleurs de lys; centre device consisting of a golden sun surmounted by a red scroll bearing the motto “Nec Pluribus Impar” in gold and with a blue imperial globe and a golden cross beneath.