On August 30 1643, after the death of the Cardinal de Richelieu, the regiment was disbanded to the exception of its colonel company. However, it was re-established by the Cardinal de Mazarin the following year (on 10 March 1644) and named “Vaisseaux-Mazarin”. It assumed garrison duties in Perpignan till 1654.

In 1648, the disbanded Du Breuil Infanterie was incorporated into the regiment.

In June 1650, the regiment was renamed “Vaisseaux-Candale”. In 1652, the disbanded Candale Infanterie was incorporated into the regiment.

From 1654, the regiment took an active part in the operations in Roussillon and Catalonia. In 1654, it took part in the capture of Villefranche, in the relief of Roses, and in the siege of Puycerda; in 1655, in the capture of Cap de Quiers, Castillon and Cadagnes and in the combat of Solsone. In April 1658, the Cardinal de Mazarin re-acquired the regiment who became known again as “Vaisseaux-Mazarin”.

In 1659, the regiment returned to France where it assumed garrison duties in Provence.

In 1661, at the death of the Cardinal de Mazarin, the regiment was renamed “Vaisseaux-Provence”.

In 1663, the regiment was sent to Italy to support the demand of reparation of Louis XIV against the Papal States. After the signature of the Treaty of Pisa, the regiment returned to France.

In 1664, eight companies of the regiment took part in the expedition against Djigelly in Algeria. This expedition aborted because of disease and the fleet returned to Toulon.

In 1667, at the beginning of the War of Devolution (1667–68), the regiment set off from Provence for Flanders where it took part in the sieges of Tournai, Douai and Lille, assuming garrison duties in Lille at the end of the campaign. A detachment of the regiment distinguished itself while escorting a convoy of boats on the Scarpe and the Scheldt. Because of this feat of arms, King Louis XIV decided to acquire the unit on 20 September 1669. The regiment then received the name of “Royal-Vaisseaux”.

When peace was signed, the regiment to Besançon where it formed part of the garrison. In 1680, it was at Schlestadt; in 1681, in Brisach. It was then sent to occupy the Citadel of Casale in Italy. By 1683, the regiment was stationed in Aire. Its first battalion then took part in the siege of Courtrai while its second battalion joined the force blockading Luxembourg. In 1684, during the siege of Luxembourg, the regiment formed part of the corps of observation, before assuming garrison duties in Verdun.

In 1714, the regiment was reduced to two battalions. In 1715, it incorporated men from the disbanded Valouze Infanterie.

In 1719, the regiment served in the Pyrenees, taking part in the sieges of Fontarabia, Castelleone, San Sebastian and Urgell.

In 1734, at the outbreak of the War of the Polish Succession (1733-34), the regiment was increased to three battalions. On the Rhine, it took part in the attack on the Lines of Ettlingen and in the siege of Philisbourg. In 1735, it fought in the combat of Klausen. By the end of 1735, it was stationed in Saint-Omer.

During the following years, the regiment occupied Aire, Lille and Cambrai. In 1753, it took part in the training camp of Mézières. It was then stationed in Condé and Le Quesnoy.

On the eve of the Seven Years' War, the regiment counted two battalions and had prévôté (provostship).

In 1756, the regiment was stationed in Granville. A detachment of 50 men under the Chevalier d'Eyragues was posted in the Chaussey Island where, on July 19, it was attacked by a British force. To defend the islans, d'Eyragues could count only on a small fort and on a single iron cannon. For his defence, he obtained the honours of war and his detachment was brought back to the continent. The regiment then spent the winter at Coutances and Bayeux.

By August 1 1757, the regiment was stationed at Valognes in Lower Normandy. Later the same year, it was transferred to the coast of Saintonge.

In 1758, the regiment was stationed in Bretagne. On September 11, a few companies took part in the Combat of Saint-Cast where Captain La Canorgue was killed. Later, the unit garrisoned the towns of Dinan, Niort, La Rochelle and Bayonne.

In 1762, the regiment was part of the Auxiliary Corps sent to the King of Spain to assist him in the planned invasion of Portugal.

In 1763, the regiment returned to France where it initially occupied the places of Montlouis and Villefranche. In May, it was transferred to Toulouse. 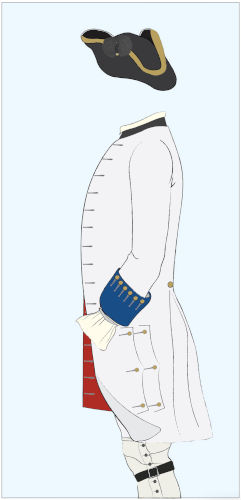