The Bavarian District supplied a regiment to the Reichsarmee during the Seven Years' War. This regiment book strength consisted of 2 battalions, including 1 grenadier company and 2 battalion guns (painted red from 1760) for an initial total of 1,170 men. There were contingents from the Bishopric of Salzburg, from Regensburg and Passau.

On February 14 1757, an assembly at Mühldorf established the theoretical contribution of each principality as presented in the following table.

During the Seven Years' War the regiment (1,468 men). We have two accounts of the organisation of this regiment and they do not entirely correspond.

Here is a first breakdown (established by the Bavarian District Council) totalling 1,468 men:

...and a second one (from Steiner-Welz's book listed in our reference section):

During the Seven Years' War the regiment was under the effective command of:

In 1757, the regiment (by this time only 4 coys) joined the Reichsarmee which was conducting operations in Thuringia and Saxony. By June, it counted 1,170 men and 65 horses. In August, this army combined with a French contingent under the Prince de Soubise to form the Franco-Imperial Army. On November 5, the regiment was posted at Nuremberg and did not take part in the battle of Rossbach. In December, the regiment still counted 1,047 men and 82 horses.

From December 1759, the grenadier company and first battalion were stationed at Hof and the second battalion at Lichtenberg and Naila.

In December 1760, the entire regiment assembled at Hof before marching to Münchberg in mid December 15.

On October 29 1762, the regiment took part in the battle of Freiberg.

The colour carried by the Leib company of the regiment is not documented. However, we made a reconstruction of it based on a colour dating from 1709. This colour is often illustrated with a light brown field but it might simply have been white and faded to light brown through time. The arms constituting the centre device of this colour have been modified to reflect the arms as they were at the time of the Seven Years' War. 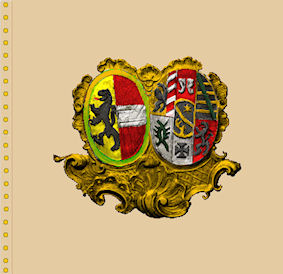 The companies from Salzburg proper probably carried the following colours: white field, centre device consisting of an allegory within a golden frame; 4 red inverted corner wedges; 4 light blue inverted flames (this colour dates from the reign of Sigismund III Christoph von Schrattenbach 1753-1771 who was was Prince-archbishop of Salzburg and, in this position, possibly Chef of the regiment) 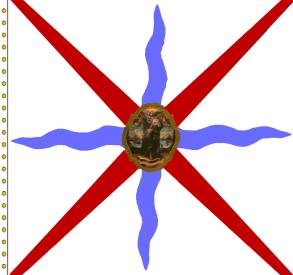 The staff was painted red and had a brass ferrule. The finial was brass or gilt with the crossed keys of Regensburg.

The companies from Passau probably carried the following colour from 1723 to 1761: 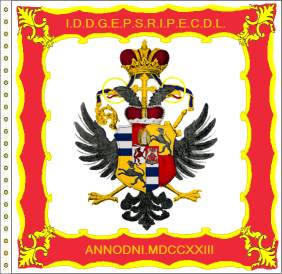 Then, in 1762 and 1763, the companies from Passau probably carried colours carrying the arms of Joseph II Maria, Count of Thun and Hohenstein, who was prince-bishop of Passau from 1761-1763. The staff was painted white and had a brass ferrule; the finial was brass or gilt with the engraved arms of Passau: 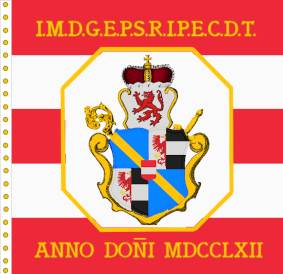