The tercio was created during the Portuguese Restoration War (1640–1668) on 21 February 1658 in Cádiz from seven companies detached from the Armada (Navy) who had campaigned under the command of Don Pedro Paniagua, Marquis de Lanzarote with the Army of Extremadura against the Portuguese. Five new companies were immediately added to the tercio who was designated as the “Tercio de la Armada”.

In 1658, the tercio took part in the heroic defence of Badajoz; in 1659, in the unsuccessful siege of Yelves; in 1661, in the siege of Arronches; in 1662, in the storming of Borba, in a combat at Estremoz, in the siege and capture of Juromenha and in the capture of Veiros, Monforte, Cabeza da Vide, Alter de Chaou, Alter de Pedroso, Crato, Fronteira, Azumás and Onguelha; in 1663, in the capture of Evora and in the battle of Ameixial. In 1664, the tercio was posted in Badajoz. The same year, it was renamed “Tercio Provincial de Madrid”. In 1665, it took part in the siege of Vila Viçosa and in the battle of Monte Claros. In 1666, it defended various places in Extremadura.

In 1682, the tercio was transferred from Extremadura to Navarre. In 1684, it campaigned against the French in Catalonia, garrisoning Gerona and successfully defending it.

On 30 August 1664, the tercio was renamed “Tercio Provincial de Madrid”. It was also known as the “Tercio de los Colorados Viejos”. By 13 September 1667, the tercio counted 21 companies, including 137 officers, 70 sub-officers and 515 soldiers. It was soon reorganised in only eight companies.

In 1684, the tercio (then counting 21 companies) was sent to Catalonia.

In 1689, during the Nine Years' War (1688–97), the tercio garrisoned Gerona once more. In 1691, it defended Seo de Urgel and was brought to France as prisoners of war. In 1692, it was exchanged and returned to Spain. In 1694, it fought in the battle of Torroella. In 1695, it garrisoned Barcelona before joining the field army. In 1697, it took part in the unsuccessful defence of Barcelona.

In 1701, on the eve of the War of the Spanish Succession (1701–13), the tercio formed part of the garrison of Cádiz. In 1702, it took part in the defence of Cádiz against a powerful Anglo-Dutch amphibious expedition. In 1703, it was transferred to the Province of Extremadura. In 1704, during the campaign of Portugal, the tercio took part in the siege of Portalegre and in the capture of Marvão and Castelo de Vide. In 1705, it vainly defended Albuquerque and took part in the defence of Badajoz. In 1706, it campaigned in Castile. On 28 February 1707, the former “Tercio Provincial de Madrid Colorados Viejos” was transformed into a regiment designated as the “Regimiento de Sevilla”. The same year, this regiment took part in the Battle of Almansa, in the siege and capture of Játiva, and in the unsuccessful siege of Denia. In 1708, it took part in the siege of Alcoy, in the reconquest of Tortosa and in the capture of Denia. In 1709, it fought the insurgents in the district of Valencia. In 1710, it fought in the Battle of Almenar, in the disastrous Battle of Saragossa, in the Combat of Brihuega and in the decisive and victorious Combat of Villaviciosa. In 1711, the regiment garrisoned Tortosa. In 1713, it fought against the insurgents in Catalonia. It took part in the relief of Solsona, Oliana, Balsareny, Berga and Manresa and in punitive raids against Caldas, Castell-Tersol, Moyá, Llausanes and Secano. It also took part in actions at Talamanca, Monserrat, San Llorens and Sentmanat.

In 1716, the regiment was permanently stationed in the District of Valencia.

In 1718, fearing a new war with France, the king sent the regiment to occupy San Sebastian in the Province of Guipúzcoa which surrendered to the French after a valiant defence of its citadel. In 1719, it campaigned in Catalonia. In 1720, it took part in the siege of Castell-Ciutat.

After the war, in 1721, the regiment garrisoned Torruella. The same year, it incorporated the disbanded “Regimiento de Madrid”

In 1723, the regiment was sent to the Isle of Elba where it garrisoned Portolongone until 1732.

In 1733, during the War of the Polish Succession, the first battalion of the regiment was sent to Italy. In 1734, it fought in the Battle of Bitonto. It was then joined by the second battalion. In 1735, the first battalion took part in the capture of Messina and then rejoined the second battalion at Naples. Together, they took part in the siege and capture of Mirandola. In 1736, the regiment sailed back to Spain. On the way, a ship transporting two companies sank with all hands.

In 1737, the regiment was sent to Ceuta. In 1740, it was transferred to Majorca and Ibiza in the Balearic Islands.

In 1744, during the War of the Austrian Succession, the first battalion of the regiment served aboard the fleet and took part to the naval battle of Cape Sicie. In 1748, the entire regiment was sent back to Barcelona from where it marched to the District of Valencia.

In 1755, the regiment returned to Spain where it assumed garrison duty in Alicante, Valencia and Cartagena.

In 1759, the regiment was stationed in Málaga with detachments at Melilla, Peñon de la Gomera and Alhecemas.

During the invasion of Portugal in 1762, the regiment was brigaded with Lombardía Infantry under General Madariaga. The brigade then advanced on Bragança which was easily captured. In August, the regiment took part in the siege and capture of Almeida. By the end of August, several companies of the regiment were garrisoning the frontier town of Valencia de Alcántara. They were decimated by the surprise attack of an Anglo-Portuguese force on the town. 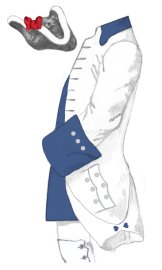 The coronela (colonel flag) of the regiment was white with a red Burgundian cross terminated in each corner by a medallion carrying the arms of the regiment (white field carrying a king holding sword) surmounted by a golden crown. In the middle: the arms of Charles III surrounded by the necklace of the order of the Toison de Oro (Golden Fleece).

The batallonas (ordonnance flags) of the regiment were white with a red Burgundian cross terminated in each corner by a medallion carrying the arms of the regiment (white field carrying a king holding sword) surmounted by a golden crown.