The Slobódskiy Hussar Regiment was created in Bielgorod on September 26, 1756 with ten companies of Slobodian Cossacks. It totaled some 1,200 men.

From 1759, the regiment was stationed on the western border of the Russian Empire. It then consisted of 35 officers, 1,200 men (including 100 non-combatants).

During the winter 1760-61, the regiment was attached to Tottleben's corps stationed at Karlin. After the conclusion of a cease-fire, it took its winter quarters at Berent.

In 1761, the regiment, then having only 300 horses, took part in the campaign in Pomerania where it was attached to Amialchnaroy's brigade in Rumyantsev's Corps and was involved in the siege of Colberg. The regiment wintered in Pomerania. During the same year, it was reorganised in squadrons. 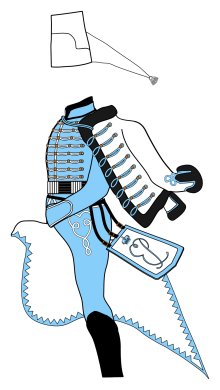 Trumpets and kettle drums were made of copper and decorated with light blue (maybe white) lace and cords.