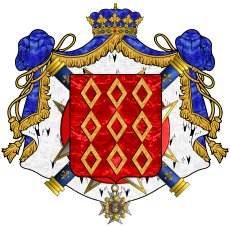 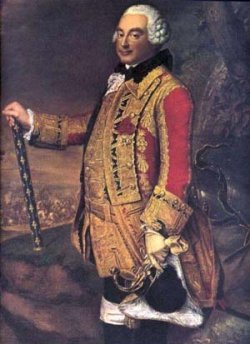 Charles de Rohan was the son of Jules François Louis de Rohan, Prince de Soubise, captain-lieutenant of the Gendarmes de la Garde, and of Anne-Julie-Adélaïde de Melun. He was also the grandson of the Princesse de Soubise, who is known to history as one of the mistresses of Louis XIV.

In 1724, Soubise's parents both died from smallpox at Paris. His grand-father Hercule then took charge of him and he was raised at the court where Soubise became the companion of the young Louis XV who had the same age.

In 1732, Soubise joined the 1st company of the Mousquetaires de la Garde, thus beginning a military career where his close relation with the king and the protection of Mme de Pompadour guaranteed him rapid promotion.

In 1733, Soubise was promoted to captain.

On January 17 1740, Soubise was promoted to brigadier.

In 1743, Soubise was promoted to maréchal de camp.

On May 11 1745, Soubise took part in the Battle of Fontenoy where he accompanied Louis XV.

On January 1 1748, Soubise was promoted to lieutenant-general.

In 1749, Soubise inherited the estates of Roberval, Rhuis and Saint-Germain.

In 1751, Louis XV appointed Soubise gouvernor general of Flander and Hainaut and governor of Lille.

In 1757, soon after the beginning of the Seven Years' War, Soubise was initially placed under the command of the Maréchal d'Estrées for the French invasion of Hanover before being put in command of an army of 24,000 men who joined the Reichsarmee for the planned reconquest of Saxony. On November 5, the combined army sustained the crushing defeat of Rossbach at the hands of Frederick II of Prussia. During this battle Soubise was unable to coordinate the action of his troops.

On July 23 1758, the vanguard of Soubise's Army under the Duc de Broglie defeated a Hessian force in the Combat of Sandershausen. Later during the year, on October 10, Soubise himself won the Battle of Lutterberg against an Allied Army. For these victories, Soubise obtained the title of Maréchal de France, minister of state, peer, captain and lieutenant-general of the provinces of Flander and Hainaut.

In 1762, Soubise defeated Ferdinand of Brunswick at the Combat of Nauheim.

After the Seven Years' War, Soubise lived the life of a courtier and man of fashion in Paris. He was protected by Madame du Barry and other favourites of the king.

In 1774, at the death of Louis XV, his successor Louis XVI confirmed Soubise in his charge of minister of state.

In 1784, after the bankruptcy of his son-in-law and the scandal of the collier de la reine, Soubise retired from public affairs.

This article incorporates texts from the article "Soubise" of the Encyclopædia Britannica (11th ed. London: Cambridge University Press, 1911), a publication now in the public domain.