From 1665 to 1702, this regiment belonged to a Celler regiment (which would later become Knesebeck Infantry) counting two battalions. In 1702, each battalion became an independent regiment.

In 1714, the regiment formed part of the garrison of Ratzeburg in the Electorate of Hanover.

In 1719, the regiment was part of the force that General von Bülow brought to Mecklenburg. It took part in the action of Wallsmühlen where the Mecklenburger and Russian corps were taken prisoners. The regiment then came back to Hanover where it took up winter-quarters in Güstrow. In 1720, it garrisoned Rostock where it remained until 1733.

In 1733, the regiment went back to Güstrow where it was blockaded in the castle by 20,000 peasants and some Mecklenburger troops led by von Tilly. Soon, several Hanoverian regiments came to its support and dispersed the insurgents and took Tilly and General-Adjutant von Reiser prisoners. In 1734, Lieutenant-Colonel Both at the head of three companies went to Osterode where he was later joined by three other companies led by Colonel Monroy. The regiment then garrisoned Northeim, to the exception of a few companies who remained in Rostock. In 1736, it was transferred to the garrison of Lüneburg.

In 1741, during the War of the Austrian Succession, the regiment went to the camp of Nienburg. In 1742, it was sent to Brabant. In 1743, it was transferred to the Main and fought in the Battle of Dettingen where it lost more than 300 men killed or wounded. It then returned to Brabant. In 1744 and 1745, the regiment served on the Rhine. In 1746, it took part in the Battle of Rocoux; in 1747, in the Battle of Lauffeld; in 1748, in the affair of Rosenthal not far from Bergen op Zoom. At the end of the war, it was sent to garrison Münden.

In April 1757, during the French invasion of Hanover, the regiment marched to the camp of Hameln and, from there, to Hervorden and Bielefeld. On July 26, it took part in Battle of Hastenbeck where it was deployed in the first line of the right wing under the command of Lieutenant-General Zastrow. It then followed the Allied army in its retreat by Nienburg and Verden to Stade. In December, when Ferdinand of Brunswick launched an Allied counter-offensive in Hanover, the regiment took part in the attempt to recapture Zelle. It then took up its winter-quarters in Hagen not far from Lüneburg.

On February 11 1758, during the Allied winter offensive in Western Germany, the regiment set off from Hagen to join the corps besieging Nienburg. The town had already surrendered when it arrived, so it resumed its march towards Minden which surrendered on March 15. It then took up new quarters in Warendorf, in the area of Münster. By May 26, the regiment was with Ferdinand's main force in the camp of Nottuln. On May 31, it accompanied Ferdinand in his offensive on the west bank of the Rhine. On June 17, when Spörcken advanced from his camp at Rheinberg, he left General Hardenberg at Büderich with this regiment and Gotha Infantry). On July 17, the regiment went to Moers. On August 2, it marched to Kleve. On August 4, it passed the Rhine on boats at Spyck to reinforce Imhoff at Mehr where he was about to be attacked by a superior force under Chevert in an attempt to seize the Allied bridgehead at Rees. On August 5, during the Combat of Mehr, Imhoff sent the regiment upon his right, in a coppice, in order to fall upon the uncovered French left. On September 30, the regiment joined the corps of the Hereditary Prince of Brunswick. On October 18, this corps marched against Chevreuse's Corps at Soest. On October 19, it advanced on Werl. On December 1, the regiment joined the troops who formed a cordon between Werne and Borken.

On February 10 1759, the regiment was replaced by Jung Zastrow Infantry and marched to Osnabrück. In March, it joined the corps under the command of of General Imhoff in Sauerland. On March 24, it marched to Unna where the Hereditary Prince of Brunswick assumed command of the corps. On June 10, this corps effected a junction with the main Allied army of Ferdinand of Brunswick at Soest. The regiment was then attached to Post's Brigade in the first line of the infantry centre. On August 1, it took part in the Battle of Minden where it was deployed in the second line of the 4th column under Major-General Wissembach. It then followed the victorious army in its advance up to Giessen in Hessen. It then took part in the siege of Münster.

On January 25 1760, the regiment took up its winter-quarters in Radolfshausen and Schwarzenborn. On March 16, it set off from its quarters to join Major-General von Luckner for his expedition against Fulda. For the campaign of that year, the regiment served in the army of the Hereditary Prince of Brunswick. On July 10, the regiment was present at the combat of Corbach. It formed part of the Reserve under the Prince von Anhalt and did not take part in the engagement. On the night of July 14, having intelligence that a French party (6 bns, Bercheny Hussards and some light troops) under General Glaubitz was on its way to Ziegenhain from Marburg, evidently with the object of disturbing his communications, Ferdinand detached the Hereditary Prince to take command of 6 bns (Behr (1 bn), Marschalk (1 bn), Mansbach (2 bns) and Hessian 2. Garde (2 bns)) which were lying at Fritzlar, and to attack Glaubitz whose forces had encamped at Vasbeck for the night. On the morning of July 15, the Hereditary Prince marched rapidly southward, being joined on the way at Zwesten (present-day Bad Zwesten) by Luckner Hussars and by the 15th Light Horse (under Major Erskine), which had just arrived from Great Britain. On reaching the vicinity of Ziegenhain, he found that Glaubitz was encamped farther to the west, near the village of Emsdorf. His troops being exhausted by a long march, the Hereditary Prince halted for the night at Treysa. On July 16, he captured most of Glaubitz's detachment in the Engagement of Emsdorf. During this action, the regiment covered the road from Emsdorf to Kirchhain along with Freytag Jägers and 5 guns. In September, the regiment followed the Hereditary Prince of Brunswick in his expedition against Wesel reaching the place on October 1 and opening the trench on October 11. A few days later, on October 16, it took part in the Battle of Clostercamp against a relief force under the Marquis de Castries. In this battle, the regiment was deployed in Major-General von Behr's Brigade and his two staff officers were wounded. It later retreated across the Rhine with the rest of the army. It encamped between the Lippe and the Roer. In December, it took up cantonments in Rühden.

On January 26 1761, Colonel von Craushaar led his regiment against Maupéou's Corps which was advancing on Rühden, driving it back. On February 9, the regiment set off from Rühden to join Ferdinand of Brunswick for his expedition in Hesse. It was attached to the corps of the Hereditary Prince who advanced towards Marburg. On February 13, it captured Rosenthal. On February 14, the attack on Marburg failed and the corps retired, the regiment being detached to Frankenberg under Lieutenant-General Oheim. On February 18, along with Post Infantry, the Hessian Leib-Regiment, Breidenbach Dragoons, Busche Dragoons and the Hesse-Kassel Hussars, it attacked Maupéou's Corps near Sachsenberg, taking Maupéou, 5 officers and 200 men prisoners. However, Maupéou's Corps managed to retire by Neukirchen in the direction of Hallenberg. On June 1, the regiment rejoined the corps of the Hereditary Prince at Nottuln. On June 25, it crossed the Lippe. On June 29, it advanced against Condé's Corps posted at Unna, forcing Condé to retire to Soubise's entrenched camp near Soest. On July 16, the regiment took part in the Battle of Vellinghausen where it was deployed on the right wing near Scheidingen in Lieutenant-General Kielmansegg's Brigade. In August the regiment formed part of a detachment (2 cavalry rgts, 6 bns) under Kielmansegg sent to the relief of Münster where it entered on August 17. On August 30, it was part of a column who engaged the French near Albachten. On September 5, it rejoined the corps of the Hereditary Prince at Dülmen. On September 18, this corps passed the Diemel at Warburg and took position at Heckershausen. On September 21, it marched by Niedenstein to Fritzlar. On November 18, the regiment took up its quarters in Sittinghausen. However, when a French corps marched in this direction, the regiment had to retire to the Lippe., In December, it took up its winter-quarters at Nordwalde and Bockhorst.

As of May 23 1762, the regiment served in the Corps of the Hereditary Prince of Brunswick operating in Westphalia. In June, it encamped at Nottuln. On August 26, it was at the cannonade of Grüningen. On August 30, it fought in the Combat of Nauheim where it was deployed in Lieutenant-General von Hardenberg's column. Around 11:00 a.m., it was among the Hanoverian regiments who passed the Wetter, personally led by the Hereditary Prince. On September 21, it took part in the Combat of Amöneburg where it belonged to Zastrow's Corps occupying the ground immediately before the Brücker Mühle (Zastrow commanded in the absence of Lieutenant-General Hardenberg). Ensign von Zelle and Colonel von Craushaar were wounded in this combat. On September 25, the regiment joined Wangenheim's Corps on the heights of Homburg. On November 30, it marched to its winter-quarters in Beckum in the region of Münster. On December 24, during the peace negotiations, the regiment set off from Beckum and reached Hameln in Hanover on December 31.

On March 31 1761, the regiment marched from Hameln towards Stade where it was assigned to the garrison of the place. 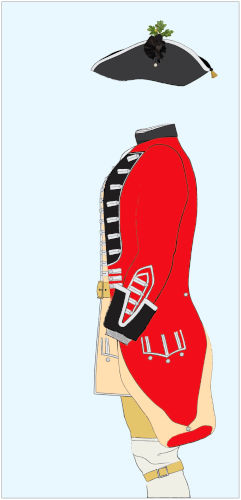 The drum pattern had hoops in alternating black and red diagonal stripes, white drum cords over a brass drum with the Arms of Hanover in the centre.

Regimental Colours: pale yellow field; centre device consisting of a seated Athena, the Greek goddess, bestowing laurels on a champion, the whole scene surrounded by a blue wreath; a scroll above carrying the motto FORTITER PUGNANTI ISTA CORUNA DATUR Hereafter, we present an illustration from the Reitzenstein Sammlung, dating from circa 1761 (left) and the interpretation of Hannoverdidi (right).