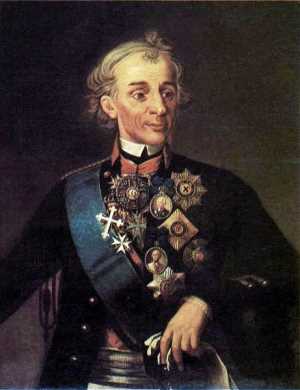 Painting of Aleksander Vasilievitch Suvorov depicted in his uniform of the Preobrazhensky Regiment worn during the reign of Paul I of Russia – Source: Wikipedia

Suvorov was born into a noble family originating from Novgorod. Some of his ancestors had emigrated from Sweden in 1622. His father, Vasiliy Suvorov, was a general-in-chief and a senator in theGoverning Senate, and was credited with translating Vauban's works into Russian. His mother, whose maiden name was Manukova, originated from an Armenian family.

As a boy, Suvorov was a sickly child and his father assumed he would work in civil service as an adult. During his chilhood, under his father's eye, he learned mathematics, astronomy, foreign languages, literature, cartography, history of military arts, shooting, horse riding, fencing, engineering and some other subjects related to military service.

On November 4 1742, Suvorov started his military career by enlisting as a musketeer in the Semyonovskiy Leib-Guard.

On January 12 1745, Suvorov joined the 8th company of the Semyonovskiy Leib-Guard.

On May 6 1747, Suvorov was promoted to corporal in the the Semyonovskiy Leib-Guard, a rank that he assumed from January 12 1748. During this period he continued his studies attending classes at Cadet Corps of Land Forces.

On January 28 1756, Suvorov became Chief-Quartermaster (ranking as captain) in the Province of Novgorod. On October 20, he was promoted to general-adjutant-lieutenant; on December 15, to 1st major.

On February 15 1757, Suvorov was transferred to Kazanskiy Infantry.

On November 19 1758, Suvorov was promoted to lieutenant-colonel and assumed command of the Fortress of Memel (present-day Klaipėda).

In 1759, Suvorov joined the Russian field army placed under the command of Fermor as staff-major. There is no confirmed information that Suvorov took part in the Battle of Paltzig. On August 12, he took part in the battle of Kunersdorf. The same year, Suvorov became Ober-Krieg-Komisar (Main War Commissary).

On March 6 1760, Suvorov returned to field service. He became a member of Fermor's staff and, in that role, took part in the capture of Berlin.

In 1761, Suvorov assumed command of the Tverskiy Dragoons in place of Colonel Ivan Mieden who was on sick leave. As commander of this regiment, Suvorov took part in the campaign in Pomerania where he saw action in several engagements:

Sometimes during this period, Suvorov assumed command of the Arkhangelogorodskiy Dragoons and received an award from Rumiantzev.

During the War of the Bar Confederation, in 1768, Suvorov dispersed the Polish forces under Pułaski, captured Kraków paving the way for the first partition of Poland between Austria, Prussia and Russia, and reached the rank of major-general.

In 1774, Suvorov was dispatched to suppress the rebellion of Pugachev, who claimed to be the assassinated Tsar Peter III, but arrived at the scene only in time to conduct the first interrogation of the rebel leader.

In 1786, Suvorov was promoted general of infantry.

During the Russo-Turkish War of 1787-1792, Suvorov won many victories; he was wounded twice at Kinburn (1787), took part in the siege of Ochakov, and in 1789 won two great victories at Focşani and by the Rymnik River. On December 22 1790, Suvorov successfully stormed the reputedly impenetrable fortress of Ismail in Bessarabia.

In 1794, Suvorov was sent to Poland to quench the Kościuszko Uprising. On October 10, he captured Kościuszko in the Battle of Maciejowice. On November 4, his troops stormed Warsaw where they slaughtered some 20,000 civilians. Suvorov was promoted field-marshal for the capture of Warsaw.

At the death of Catherine II in 1796, Suvorov was dismissed by the new Tsar Paul I.

In 1799, Suvorov was recalled to serve against the French in Italy where he won the battles of Cassano d'Adda, Trebbia, and Novi. Nevertheless, he had to retire to Vorarlberg, a retreat that he masterfully conducted. He was promoted generalissimo for this feat of arm.

Early in 1800, Suvorov returned to Saint Petersburg. Tsar Paul refused to give him an audience, and, worn out and ill, the old veteran died a few days afterwards on 18 May 1800, at Saint Petersburg. Lord Whitworth, the British ambassador, and the poet Gavrila Derzhavin were the only persons of distinction present at the funeral.