The regiment was raised in Angers on January 17, 1625 by the Baron de Plessis-Joigny, governor of the place, to fight against the Protestant of La Rochelle, whose expedition in Bretagne failed. It was thus disbanded on May 26, 1627. However, troubles continuing at La Rochelle, the regiment was re-raised on July 28, 1627 and took part in the siege of the city. After the submission of La Rochelle, it assumed garrison duty on Oléron Island.

At the beginning of 1630, during the War of the Mantuan Succession (1628–31), the regiment quit Oléron to march to Piedmont, where it occupied Saint-Jean-de-Maurienne and captured the town and castle of Veillane.

In 1631, the regiment followed the king in Lorraine and took up its winter-quarters in Alsace. In 1632, it was attached to the Army of Germany. In 1633 and 1634, it served in Lorraine. In September 1634, it joined the army assembling for a winter campaign in Alsace.

In 1650, during the Fronde (1648-1653), the regiment returned to France and cantoned near Paris. During this period, the regiment lost its name of “Touraine” and adopted for about twenty years the one of its successive owners.

In 1652, the regiment returned to Piedmont. In 1653, it was transferred to Catalonia. In 1655, it returned to Italy and was at the siege of Pavia. In 1656, it took part in the capture of Valencia; in 1657, in the relief of Valencia, in the siege of Alessandria and in the capture of the castles of Varas and Novi. In 1658, it campaigned in Catalonia where it remained until the signature of the Treaty of the Pyrenees in November 1659.

The regiment then returned to France where it assumed garrison duty in Blaye and was reduced to 4 companies. In September 1661, these companies took part in the repression of troubles in Montauban. In 1666 and again in 1670, the regiment was ranked 19th, just after Crussol Infanterie.

In 1669, the regiment was among the 14 regiments which embarked at Toulon to assist the Venetians against the Turks in Crete. It returned to France the same year and assumed garrison duty in Picardie and Flandre, where it remained until 1673.

In the Spring of 1714, after the Treaty of Rastatt, the regiment returned to France and was brought back to full strength by the incorporation of Montsorreau Infanterie, Sebbeville Infanterie and Bellisle Infanterie.

By the time of the Seven Years' War, the regiment counted two battalions.

During the Seven Years' War, the regiment ranked 18th and was under the command of:

Somewhere between August 23 and September 6, 1757, the regiment joined the Army of Saxony, led by the Prince de Soubise, in the area of Erfurt and Eisenach. On September 27, it was brigaded with the Swiss Wittmer Infanterie under M. de Waldner in the first line of the left wing of the Franco-Imperial Army. On November 5, the regiment took part in the disastrous Battle of Rossbach, where it was brigaded with Condé Infanterie in Saint-Germain's Corps. At the end of the year, it took its winter-quarters in Eschwege in Hesse.

In June 1759, during the French offensive in western Germany, the regiment was part of the main army under the command of the Marquis de Contades and was deployed in the first line, on the right wing of the infantry centre. On August 1, the regiment took part in the Battle of Minden, where it was deployed in the first line of the infantry right wing under the command of the Chevalier de Nicolaï. It was sent forward to occupy a few houses and hedges situated in front of the French cavalry centre but was soon driven out of this defensive position by a charge of an Allied cavalry brigade. On August 15, during the French retreat, the regiment, which had suffered heavily at Minden and was now too weak to serve adequately, was sent to the rear at Marburg where it arrived on August 19.

By May 23, 1760, the regiment was part of the left reserve of the first line of Broglie's Army, placed under the command of Saint-Germain. On June 17, the regiment was part of a small division, under M. de Leyde, who reached Düsseldorf, on its way to join Saint-Germain. On July 6, the regiment moved back from Freienohl to Arnsberg to rendez-vous with d'Auvet's Corps. On July 31, the regiment took part in the Battle of Warburg where it was deployed on the extreme right wing of the first line, close to Warburg. At the end of the engagement, the regiment, along with La Tour-du-Pin Brigade, formed on the heights in front of the bridges to cover the retreat of the French army. On October 4, M. de Maupéou's Corps (including this regiment) left for the Lower Rhine. On October 13, the regiment arrived at Neuss with Castries. On October 17, after having been left behind during Castries' advance from Neuss to Clostercamp, the regiment finally made a junction with Castrie's main corps.

By February 9, 1761, the regiment was attached to the Army of the Lower Rhine under M. de Muy and was quartered in in the area of Moers. By June, this army had been placed under the command of the Prince de Soubise. On July 4, the regiment took part in an attack against Allied troops entrenched in the mill and Castle of Schafhausen, driving them back. On July 16, it fought in the Battle of Vellinghausen where it was deployed in the second line of the infantry centre.

In March 1762, the regiment was attached to the Army of the Upper Rhine, serving once more under Soubise. On June 24, the regiment took part in the Battle of Wilhelmsthal where it was deployed in the first line of the main body. By July 12, it was posted at Landwerhagen. In December, when the French army started to retire from Germany, the regiment was directed on Landau. 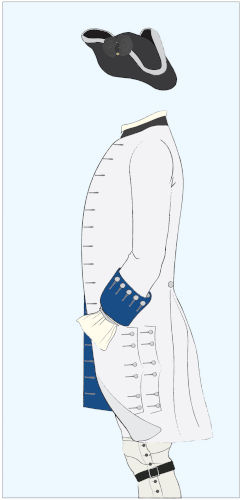 Warning: sources do not agree on the disposition of the colours among the various cantons.