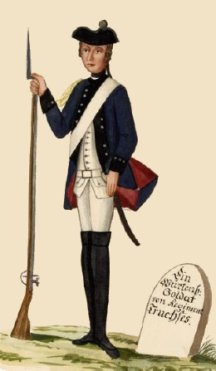 This Fusilier regiment was created on December 15 1752 from elements of the former Fuss Garde. It initially consisted of a single battalion counting 5 fusilier and 1 grenadier companies.

From 1756, the regiment was designated as the Füsilierregiment Truchsess..

In 1757, the regiment was organised in 2 battalions with 5 fusilier and 1 grenadier companies per battalion. Each company counted some 100 men for a total book strength of 1,219 men including staff. Furthermore, each battalion had a 3-pdr gun.

In 1759, after its owner retired, the regiment was designated as the Füsilier-Regiment an vacant until it became the property of Prince Friedrich Wilhelm von Württemberg in 1762.

In 1757, the regiment joined the Austrian army in Silesia. In October, it was at the Siege of Schweidnitz. On November 22, it took part in the Battle of Breslau where it was deployed in the first line of the infantry centre of Nádasdy's Corps. On December 5 at the Battle of Leuthen, the regiment was deployed in the first line of the Württemberger Contingent under Marshal Spiznass at the extreme far left of the Austrian positions as part of Nádasdy's Corps which became the main target of the Prussian attack. During the same year, the 2 grenadier companies of the regiment were converged with those of Roeder Infantry to form the 3. Grenadier-Bataillon von Buwinghausen.

In 1758, one battalion of the regiment was part of Major-general von Roeder's Brigade (including also Prinz Louis Infantry and Roeder). On August 8, this brigade made a junction with Soubise's Army in Kassel. On October 10, the regiment took part in the Battle of Lutterberg where it was placed in the centre of the second line. On November 30, it was at the action between Fulda and Lauterbach. 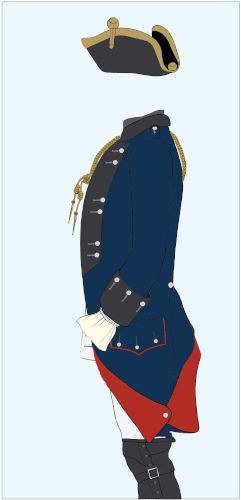