The regiment could trace its origin to a band raised by the Duc d'Épernon in 1615. On July 7 1621, this band was formed into a regular regiment under the Baron de Castelbayard and took part in the siege of La Rochelle. In 1622, it was at the siege of Royan. The regiment was disbanded in November 1622 after the Peace of Montpellier.

In 1623, the Duc d'Épernon obtained the authorisation to raise two infantry regiments and a company of gendarme at his own expense. The present regiment then assumed garrison duty in Bergerac.

On January 17 1625, the regiment was incorporated into the Royal Army and served in the islands of Aunis before being disbanded on May 26 1626.

On June 22 1627, the regiment was definitively re-established for the siege of La Rochelle where it assumed garrison duty after the capture of the place.

In 1629, during the War of the Mantuan Succession (1628–31), the regiment joined the “Army of Savoie”. In August, a detachment of 400 men entrenched themselves in Rusignano near Casale. In 1630, it was besieged by the famous Spinola. They resisted for 14 days under a rain of 1,500 cannonballs. On May 14, this detachment capitulated with the honours of war and returned to France by Finale. Its officers were allowed to join the rest of the regiment in Casale. Spinola then laid siege to Casale which was interrupted by the Treaty of Ratisbon. After the siege, Spinola declared: “Give me 50,000 men as valiant and as disciplined and I'll make myself master of Europe”.

In 1631, the regiment campaigned in Lorraine. In 1632, it was at the capture of Moyenvic, Bar-le-Duc, Saint-Mihiel and Trier and took its winter-quarters on the Moselle. In 1633, it took part in the capture of Nancy where it then assumed garrison duty till November 1634. It then joined the small army assembling at Ramberweiler under the command of the Duc de Rohan.

In 1655, the regiment rallied the Grand Army of Flanders and took part in the siege of Condé. In 1656, it was at the siege of Valenciennes; in 1658, at the capture of Gravelines, Menin, Ypres and Oudenarde.

In 1660, after the signature of peace, the regiment garrisoned Menin which it evacuated when the place was retroceded to Spain. The regiment, reduced to four companies, took its quarters in Picardie. In 1662, it contributed two companies to the garrison of Dunkerque. In January 1666, it was at the camp of Croissy near Amiens and, in March of the same year, at the camp of Monchy near Compiègne.

In September 1670, the regiment assisted to the occupation of the places of Lorraine.

By 1683, the regiment garrisoned Saarbrück. In 1687, it became the property of the Duc de Crussol.

In 1688, at the outbreak of the Nine Years' War (1688–97), the regiment joined the Army of the Moselle, entering into Mainz at the end of the campaign. In 1689, the regiment distinguished itself in the defence of Mainz. In 1690 and 1691, it continued to serve with the Army of Germany. In 1692, it was attached to Bouffler's Corps who advanced on the Meuse during the siege of Namur. The regiment then fought in the Battle of Steenkerque. In 1693, it took part in the Battle of Landen, where its colonel was killed, and in the siege of Charleroi. It then became the property of Jean-Charles d'Uzès, Duc de Crussol. From 1694 to 1697, the regiment alternatively served with the Army of Flanders and with the Army of the Moselle, without participating in any major action.

After the Treaty of Rastadt, the regiment was completed by the incorporation of soldiers from the disbanded Tavannes Infanterie, Castelet Infanterie and Dampierre Infanterie. These incorporations were made according to orders issued on January 21 and March 20 1714.

During the War of the Polish Succession, the regiment served in Germany between 1734 and 1736.

During the Seven Years' War, the regiment ranked 17th and was under the command of:

When the French Army was reorganised on December 10 1762, the regiment was increased to 4 battalions by incorporating Lorraine Infanterie. The regiment then took the name of the Province of Aunis.

In 1756, the regiment was supposed to be part of a corps that should be used as an auxiliary of the Austrian Army.

In May 1757, a corps under Chevert left Neuss to join the Army of the Lower Rhine in Breda. This corps consisted of Vaubécourt Infanterie and Condé Infanterie and of Rochefoucauld-Langeac Cavalerie. At the end of June, the regiment was at the camp of Bielefeld with d'Estrées's main corps for the planned invasion of Hanover. On July 1, always under Chevert, a corps consisting of Picardie Infanterie (4 bns), Vaubécourt Infanterie (2 bns), Condé Infanterie (2 bns), one regiment of Grenadiers Royaux (2 bns), the Carabiniers and 20 guns left Bielefeld. On July 2, they arrived at Hervorden from where they set off for Hoya on July 8. A few days later, on July 26, the regiment was at the Battle of Hastenbeck where it was part of the centre under the Marquis de Contades. After the victory, the regiment encamped at Grosselsen near Hameln with the main body of the Army of the Lower Rhine from July 31 to August 2. It then participated in the conquest of Hanover and in the capture of Minden and Hanover. At the end of the year, it took its winter-quarters in the first line of the French army at Osterode and Harzberg. On December 25, along with Aquitaine Infanterie and La Marine Infanterie, it forced the passage of the Aller at the bridge of Alten-Zell and occupied the town of Celle (Zell).

At the end of May 1759, when the French Army of the Rhine launched its offensive in western Germany, the regiment remained on the Rhine as part of the corps of the Marquis d'Armentières.

By the end of January 1760, the regiment had taken its winter-quarters in the first line of the French army. By mid March, the regiment was billeted in Sankt-Goar, still in the first line. By May 23, the regiment was part of the second line of Broglie, Victor François, Duc de|Broglie]]'s Army, placed under the command of the Prince de Croy. On July 31, during the Battle of Warburg, the regiment was attached to the Corps of the Maréchal-de-Camp de la Morlière posted at Welda, 6 km to the south of Warburg in support of de Muy. On October 4, M. de Maupéou's Corps (including this regiment) left for the Lower Rhine.

On July 16 1761, the regiment was at the Battle of Vellinghausen. On September 2, it took part in the attack on Osterode and the entrenchments of the Woods of Hartz. On September 25, it participated in the capture of the Castle of Schwartzfeld.

On September 21 1762, the regiment took part in the Combat of Amöneburg. At the end of this campaign, it returned to France. 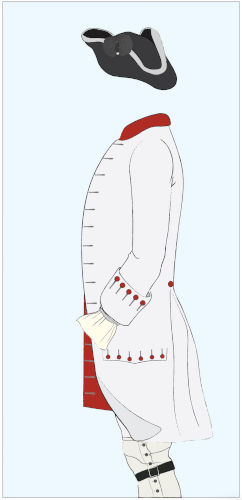