During the war against Turkey, from 1736 to 1739, many Hungarian deserters from the Turkish and Polish armies entered Russian service and settled in the southern regions of Russia.

At the beginning of the war with Sweden, on October 14 1741, the unit was transformed into a regular hussar regiment known as Vengérskiy Hussarskiy (Hungarian Hussar). In theory, it then counted 10 companies for a total of about 962 men (800 troopers). However, until July 1759, most Russian hussar regiments counted only 6 squadrons. Tielke specifically mentioned this regiment as counting 600 men during this period.

During the entire Seven Years' War, the regiment was under the command of Colonel Maksim Zoric.

In 1756, at the outbreak of the war, the regiment was stationed at Tver, Pskov and later in Courland. During the winter of 1756-57, the regiment joined the Russian field army.

In January 1758, the regiment took part in the Russian invasion of East Prussia. In July of the same year, it also took part in the invasion of Brandenburg. On September 11, during the retreat of the Russian army after the Battle of Zorndorf, about 600 men of the regiment were part of Rumyantsev's Corps who made a junction with the main army at Landsberg and encamped on the left bank of the Wartha. Around mid-November, the regiment took up its winter-quarters in Muhlhausen (present-day Mlynary) and Preussisch Holland (present-day Paslek).

In 1759, the regiment took part in the campaign in Brandenburg. On July 23, it was at the Battle of Paltzig where it was attached to Demiku's Light Cavalry Brigade deployed on the right wing of the first line. A few weeks later, on August 12, the regiment fought in the Battle of Kunersdorf where it was deployed behind the Austrian Grenzers in the first line of the right wing.

At the beginning of October 1760, during the campaign in Brandenburg, the regiment formed part of Totleben's Corps who captured Berlin. It then took up its winter-quarters in Angermünde.

At the beginning of the 1761, the regiment was part of Tottleben's Corps for the campaign in Pomerania. During the campaign it was attached to Berg's Cavalry Corps. It reinforced Suvorov's force which was pursuing Platen's Corps. On September 23, the regiment clashed with Platen's vanguard (some dragoons and Ruesch Black Hussars) in the village of Różanka near Landsberg (present-day Gorzów Wielkopolski). On October 13 near Gulzow (present-day Golczewo), a few squadrons of the regiment, under the command of Filipovic; along with the Serbskiy Hussars under the command of Colonel Tekely; and Tuverov and Colpackov Cossacks took part in the unsuccessful assault on a Prussian convoy escorted by 50 grenadiers from battalion Schwerin. Captain Schönholz ordered the Prussian convoy to form a Wagenburg and was quickly rescued by Major Potscharly's small force consisting of 300 men from Belling Hussars, 200 volunteers from Grenadier Battalion 17/22 Rothenburg and 1 gun. On November 18, the regiment took part in combat of Labuhn (present-day Łabuń Wielki). On November 26 at Fierhof, along with Rizhskiy Horse Grenadiers, Horvat Hussars, Tverskiy Dragoons and Tobolskiy Dragoons, it attacked the Prussian infantry. On December 2 along with Horvat Hussars and 2 guns, the regiment once more took part to a clash with the Prussians, attacking from the left while Brigadier Krasnoscekov attacked from the right with 400 Cossacks and Tverskiy Dragoons (commanded by Suvorova). The regiment wintered in Pomerania. 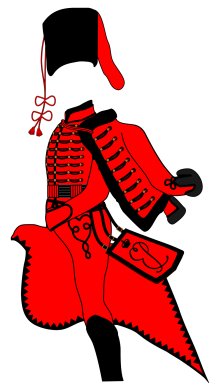