The regiment was created on December 24, 1669 for service at sea under the name of “Régiment de l'Amirauté” which was soon afterwards changed to “Régiment de l'Amiral de France”, in honour of the young Comte de Vermandois, son of Louis XIV and of Mademoiselle de La Vallière.

In August 1670, a detachment of the regiment embarked at Brest for service with Duquesne's Fleet in an expedition to the Canary Islands and Cape Verde Islands. In March 1671, that fleet returned to Brest. On December 18 1671, the regiment abandoned service at sea and joined the army at Amiens, taking the name of the Province of Vermandois which it retained throughout the Ancien Régime. It garrisoned Guise during the following winter.

On the eve of the War of the Spanish Succession (1701-13), the regiment counted a single battalion but was soon increased to two battalions in February 1701. These two battalions sent to the Spanish Netherlands and initially occupied Namur. In 1702, the regiment fought in the Battle of Friedlingen. In 1703, it took part in the Siege of Kehl, in the expedition to Bavaria, in the attack on the entrenchments of the Hornberg Valley, in the Combat of Munderkirchen, in the Battle of Höchstädt and in the capture of Augsburg; in 1704, in the disastrous Battle of Blenheim and in the defence of Landau; after the surrender of the fortress, it was allowed to retire to Strasbourg. In 1705, the regiment served on the Rhine where it participated in the capture of the Castle of Werth and in an attack against the entrenchments in front of Lauterbourg, In 1706, it took part in the relief of Fort-Louis, in the capture of Drusenheim and in an expedition against the Marquisat Island. In 1707, the regiment participated in Villars' raids in Swabia and Franconia. In 1708, it remained on the defensive along the Rhine. In 1709, it was transferred to Dauphiné. At the end of 1710, the regiment was sent to Spain where it took part in the siege of Girona. In 1711 and 1712, the regiment campaigned in the Alps. In 1713, it rejoined the Army of the Rhine and took part in the capture of Landau and Freiburg.

In 1715, the regiment was reduced to a single battalion as before the war.

In 1734, during the War of the Polish Succession (1733-35), the regiment served on the Rhine where it was employed in the attack on the Lines of Ettlingen and in the siege of Philisbourg. In 1735, it took part in the siege of Klausen.

In 1741, during the War of the Austrian Succession (1740-48), the regiment joined the Maréchal de Maillebois in Westphalia. In 1742, it marched to the frontier of Bohemia and took part in the winter campaign in Bavaria, contributing to the capture of Elnbogen and Kaaden and taking part in the relief of Braunau and in the defence of Landau and Deckendorf. In 1743, it participated in the defence of Dingolfingen. In 1744, it served on the Moselle where it fought in the combat of Saverne, attacked the entrenchments of Suffelsheim and took part in the siege of Freiburg. In 1745, it served on the Rhine. In 1746, it was transferred to Flanders and took part in the sieges of Mons, Saint-Ghislain an Charleroi and in the Battle of Rocoux. On October 27, 1746, the regiment was re-established at two battalions. In 1747, it fought in the Battle of Lauffeld. In 1748, it escorted a convoy destined to the siege of Berg-op-Zoom. On November 15, 1748, the regiment was reduced to a single battalion.

On March 10, 1749, the regiment was once more increased to two battalions by the incorporation of the disbanded Vexin Infanterie.

In 1753, the regiment was at the training camp of Saarlouis.

During the Seven Years' War, the regiment ranked 45th and was under the command of:

The new organisation, dating from December 1762, assigned the regiment to the service of harbours and colonies.

In 1756, the regiment took part to the amphibious expedition against Minorca. On June 27, the regiment participated in the storming of the Fortress of St. Philip where one of its grenadier companies formed part of the left attack against the redoubts of Strugen and Argyle; while the other was at the attack of the centre against the lunette Caroline and the West Redoubt. Captain de Kerjean and Lieutenant de Charmont were killed; while Captains de Chasteignier and Eveillon and one grenadier lieutenant were among the wounded.

The regiment garrisoned Minorca till 1762 when it returned to France where it was initially stationed in Rochefort. 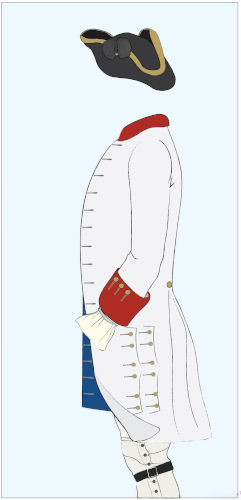