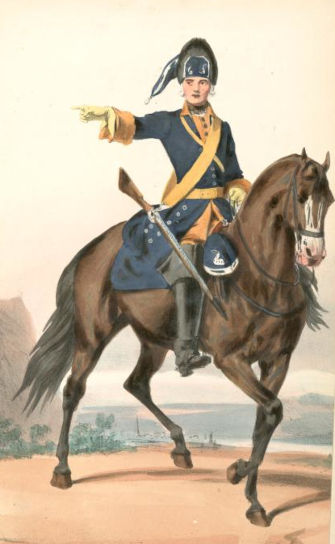 On February 1 1758, the unit was significantly increased. It now counted 456 men and consisted of:

On April 7 1758, an additional company was added bringing the total force of the unit to 608 men. It now consisted of:

In 1762, the unit was incorporated into the Volontaires de Flandre who were renamed Légion de Flandre.

By August 1, 1757, the unit was garrisoning Grenoble in Dauphiné.

By May 10, 1759, the unit was part of Beaupréau's Corps, which had taken position in Wetterau Country near Limburg. From June, the unit (estimated at 608 men) took part in the French offensive in Western Germany. On June 15, indecisive skirmishes took place between Leiberg and Wünnenberg between the light troops of both armies. Hanoverian hussars and jägers attacked the Volontaires of Chateau Thierry, Turpin Hussards and Volontaires de Dauphiné. After the capture of Minden, on July 9, the unit raided the country towards Nienburg. On August 1, the unit took part in the Battle of Minden where it was deployed in the Duc d'Havré's Corps in an advanced post at Eichhorst to the left, opposing Hille while the cavalry of the regiment was charged to maintain communication between d'Havré's at Eichhorst and Brissac's Corps at Gohfeld through the vale of Bergkirchen. By August 31, the unit was attached to Chabot's Light Corps. By September 25, the unit was deployed at Oppenrod near Annerod.

By the end of January 1760, the unit had taken up its winter-quarters in the third line of the French army along the Rhine and the Main from its mouth. By May 23, the unit was part of the left vanguard of Broglie's Army. On July 10, the unit took part in the Combat of Corbach where it was attached to Broglie's vanguard under the Baron de Clausen, deployed in the wood to the left of Corbach at the beginning of the action. In this affair, mounted elements of the unit along with Beaufremont Dragons received the counter-charge of two squadrons of the British 1st (The King's) Regiment of Dragoon Guards and 3rd Regiment of Dragoon Guards. The British charge was broken, one squadron and one standard being captured. On August 2, the unit was part of the corps sent by Broglie, under the command of the Prince de Condé, to dislodge the Légion Britannique from the woods on the left of his army. The Légion Britannique abandoned the woods without opposing resistance. On August 30, the Prince de Condé at the head of a strong corps (Volontaires Étrangers de Clermont Prince, Volontaires du Dauphiné, grenadiers and chasseurs of the army) took dispositions to attack Zierenberg. However, the attack was cancelled when the Allies retired from Zierenberg to the camp of the Hereditary Prince of Brunswick at Breuna. The Prince de Condé immediately threw the Volontaires Étrangers de Clermont Prince and the Volontaires du Dauphiné into Zierenberg and posted Turpin Hussards at Bodenhausen. On September 5, Ferdinand of Brunswick resolved to attack the Volontaires Étrangers de Clermont Prince (max. 600 horse and 600 foot) and Volontaires du Dauphiné (max. 600 horse and 600 foot) totalling 1,900 men stationed at Zierenberg. He ordered 5 bns and 150 Highlanders under the command of Captain McLeod, and 8 dragoon sqns to be ready to march at 8:00 p.m.. During the night of September 5 to 6, the Allies launched a surprise attack on Zierenberg. They stormed the Warburg Gate defended by a detachment of the unit. In this action 231 privates belonging to the unit were taken prisoners. The remnants of the unit (400 foot and 200 horse) re-established order in the town after the departure of the Allies. By September 17, the regiment acted as a detachment to protect forage activities. By December 30, the unit had taken up its winter-quarters in Nordhausen. Meanwhile, the mounted elements of the unit had taken their winter-quarters in Alzey and Kreuznach.

On June 18, 1761, during the campaign in Western Germany, the unit was attached to the vanguard of Soubise's army. This vanguard encamped on the left bank of the Emscher, near Dortmund. On July 16, the unit was present at the Battle of Vellinghausen, where it formed part of Fischer’s Light Brigade. By August 10, the unit (948 men) was in Wesel. On September 2, it was part of Vogüé’s Corps which moved closer to Wesel and threatened Dorsten. By November, the unit was posted in the district of Kleve, on the right bank of the Rhine between Rees and the Netherlands and along the Issel.

In March 1762, the unit was attached to the Army of the Lower Rhine, under the Prince de Condé, for the coming campaign in Western Germany. On April 19, M. de Viomesnil with 2,300 men (1,800 Volontaires Étrangers de Clermont Prince and Volontaires du Dauphiné, 400 men of the Grenadiers Royaux de Cambis and 100 men of Chapt Dragons) took position on the left of Wesel. In mid-May, the unit, along with the Volontaires Étrangers de Clermont Prince (approx. 900 men) took position on the Issel River. On July 4 in the morning, M. de Melfort and his vanguard bumped into Scheither's Corps at Leer (unidentified location) and took 100 men and 3 officers prisoners, including M. de Scheither. Chapt Dragons and the Volontaires du Dauphiné distinguished themselves in this action. By July 21, the unit formed part of the corps of the Chevalier de Lévis. On August 30, the unit fought in the Combat of Nauheim where it formed part of the vanguard under Lévis. On November 20, Louis XV issued his instructions regarding the French armies serving in Germany, specifying which units should return to France right away and which should stay in Germany till the final evacuation. The unit was among those which remained in Germany.

Drums carried the arms of the Dauphin

The coat of the dragoons had one row of white laced buttonholes on each side down to the waist with 1 row of buttons on the right side; white epaulette; bearskin with a blue flame laced white, a white cord and a white tassel, decorated with 2 white dolphins; leather breeches (royal blue as per Raspe); buckled shoes with oiled calf leather soft bottines (sort of leather gaiters); blue housings and schabraque decorated with 2 white dolphins

Draggons were armed with a short musket (brass fittings), a pistol and a grenadier sabre.

Ordonnance colours (as per the États Militaires of 1760): ventre de biche (chamois) field; white cross; each angle decorated with a blue dolphin and a flame