The unit was raised in Magdeburg in 1689 from seven companies of Colonel de Hutton, two from the Magdeburg Regiment and a free-company. In 1713, it became a regular infantry regiment.

From 1716, the regiment garrisoned the fortress of the City of Magdeburg. Its levies came from the three “Forest Districts” of the Duchy of Magdeburg and from the town of Oebisfelde.

During the War of the Austrian Succession, the regiment fought in the Battle of Mollwitz (April 10, 1741) and took part in the Siege of Brieg (April 11 to May 4). In 1744, it was present at the siege of Prague. In 1745, it took part in the battles of Hohenfriedberg (June 4) and Kesselsdorf (December 15).

The numbering system (Stammliste) was first used by Leopold I., Fürst von Anhalt-Dessau (Der alte Dessauer) in the Dessauer Spezifikation from 1737. Around 1780 the numbers were used in the printed Stammlisten, still with some variations for the fusilier regiments. It became official by "Cabinets-Ordre" from October 1, 1806. The present infantry regiment was attributed number 20.

The regiment was disbanded in November 1806 after the capitulation of Magdeburg.

On August 26 1756, when the Prussian army was ordered to proceed to the Prussian invasion of Saxony, the regiment was part of Ferdinand of Brunswick's column which had concentrated at Halle and advanced unopposed through Leipzig, Chemnitz, Freyberg and Dippoldiswalde, to the village of Cotta (reached on September 9) south of the Elbe near Pirna. On October 1, the first battalion of the regiment took part in the Battle of Lobositz where it was assigned to the brigade of Major-General Itzenplitz in Kleist's Division. On October 2, the first battalion of the regiment was part of Bevern's force sent to lay hold of Tschischkowitz (actual Cizkovice) on the road towards Budin.

In 1757, the regiment took part in the invasion of Bohemia. On Wednesday May 4, it joined Keith's Corps near Prague. On May 6, it did not take part to the Battle of Prague. It was rather deployed on the left bank of the Moldau near the Weissenberg as part of Keith's Corps. During an engagement near Aussig, the colonel-in-chief of the regiment was killed by a musket shot. On June 18, the regiment took part in the Battle of Kolin. It was deployed in the first line of the infantry right wing under the Prince of Bevern. This corps was continuously harassed by Grenzer musketry fire during their advance on the highway. Mannstein ordered the 2nd battalion of the regiment to face right and attack these Grenzer light troops. These skirmishes fatally delayed the regiment and proved ruinous. The regiment now blocked the way to those following it who successively fell on to support it. The whole Prussian right wing to the west prematurely became engaged in fighting against the Austrians precisely at a place where their positions were considered too strong to be attacked frontally. During this bloody battle, the regiment lost approx. 800 men. On November 22, the regiment took part in the Battle of Breslau where it was deployed in Ingersleben's Brigade, in the first line of the infantry centre. On December 5 at the Battle of Leuthen, the single remaining battalion of the regiment was deployed in the vanguard which successfully attacked the Austrian left flank. At the end of the battle, the battalion followed Frederick II to capture the bridge at Lissa intact.

In April 1758, the regiment was present at the siege and recapture of Schweidnitz. From April to July, it then took part in the failed invasion of Moravia and Siege of Olmütz. On October 14, the regiment fought in the catastrophic Battle of Hochkirch where it was initially deployed in the centre of the first line, in front of Rodewitz covering the headquarters. It lost more than 500 men in this battle.

From February 24 to March 4 1759, one battalion of the regiment was part of the small Prussian corps under the command of Major-General von Wobersnow who made an incursion in Poland against the Russian magazines. During this incursion, Wobersnow's forces destroyed provisions which would have supplied 50,000 men for 3 months.

On November 3 1760, the regiment took part in the Battle of Torgau.

In 1761, the regiment took part in an engagement near Saalfeld.

On October 29 1762, the regiment fought in the Battle of Freiberg. 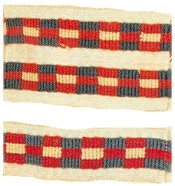 The narrow lace of the drummers consisted of a white braid decorated with a three rows checker pattern in red, blue and white. The wide lace was of a similar design but with two bands of the checker pattern.

The pikes used as staffs for the colours were brown or black.